To create 42, the new biopic about Jackie Robinson that topped the box office this past weekend, writer/director Brian Helgeland fashioned the true and emotionally explosive story of a milestone in the struggle for racial equality – the integration of baseball – into a film certain to offend absolutely no one. Any story about the success of an oppressed minority figure will register as progressive, but 42 is a politically timid film that reflects our own failures to confront the problem of race in a meaningful way. It portrays an antiquated view of the black experience, uniformly praises the suppression of black rage, and reveres capitalism and greed as pragmatic tools for achieving social justice. Ultimately, it feeds the preference of our nation to ignore the real problems of racial injustice and instead focus on symbolic victories.

As a young, white, middle-class American male, I found 42 immensely satisfying.  Its function as an historical document implies that the problem of racial inequality has been overcome, and there is a great catharsis in witnessing Jackie Robinson best his oppressors through sheer talent and opportunity, as well as watching the white folks who were at first unnerved by his presence come to embrace him. The arc of the film is long, but it bends towards justice, and while the third act offers little drama, it felt good to watch a dramatization of a moment when social justice was fought for and achieved. It’s especially heartening to see this during our current era of hyper-partisanship and congressional gridlock.

But how exactly does the film show that justice being achieved? The answer tells us much about its values and, given that the film has been embraced so warmly by critics and audiences, much about our ourselves, as well.   According to 42, racial equality is not achieved through the efforts of an organized minority group. In fact, the film suggests that Robinson’s achievements rely on his ability to suppress his outrage. Robinson is told by Branch Rickey, owner of the Dodgers, “I want a ball player who has the guts not to fight back.” Rickey knew that Robinson would be criticized for the slightest indiscretion and held to a higher standard of conduct than his white teammates. His play on the field, Rickey argued, must speak for him. Depicting a black American who can transcend systemic oppression through skill and opportunity might have been a worthwhile perspective to put on film in the 1950s or 1960s, but today it just seems anachronistic.

The opening scene makes clear what is really motivating this change: “Money ain’t black or white,” Rickey says, echoing many famous rappers of today. “It’s green.” In the very next scene, Robinson, at this point still playing in the Negro Leagues, convinces a gas station owner to let him use the whites-only bathroom by threatening to take their bus, which needs 99 gallons of gas, elsewhere. Helgeland further underlines his support for capitalism elsewhere in the film. The club’s manager, Leo Durocher (an excellent Christopher Meloni) tells Rickey at one point, “We’re playing for money…winning is all that matters.” Further, when Robinson faces his first questions by the throngs of journalists that followed him throughout his first major league season, he tells them, “It’s about getting paid,” when asked what he was trying to achieve. In a film whose tone is overwhelmingly one of reverence, Helgeland seems to fixate most on money as the root of all good. 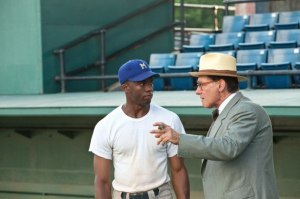 It’s perfectly valid to argue that social justice can best be achieved from within systems of oppression, but let’s not pretend that there is anything progressive about it. The film shockingly ignores the coordinated efforts of civil rights groups, the Communist Party, and progressive white activists, who, according to Peter Dreier in The Atlantic, “waged a sustained campaign to integrate baseball…as part of a broader movement to eliminate discrimination in housing, jobs, and other sectors of society.”

That is the discussion America should be having about race today but isn’t. The social inequities in our system associated with education, housing, and employment must be part of any forward-thinking discussion on race, but it’s clear from both our political discourse and recent films about the black experience that mainstream America seems no longer interested in that discussion. Perhaps it was the election of President Obama that made white America feel that the issue was closed. In his campaign for the presidency, Obama made us believe that voters could usher in a new era in which labels like “black” and “white” would grow increasingly irrelevant just by marking their ballot for a biracial candidate.

But while his election was an important symbolic act – and perhaps more than that, although the jury is still out –  it allowed us to ignore the hidden, systemic issues facing black Americans. They continue to suffer from the highest rates of poverty, unemployment, obesity, death from cancer, and infant mortality among all races. But Obama has done little to improve federal nutrition programs. He has stood by while Republicans cut food stamp benefits. He has been nearly invisible on education. And he has been worse than that on the War on Drugs. His few attempts to address race in America with the bully pulpit – the Henry Louis Gates incident and his comments on the death of Trayvon Martin – produced a wicked Republican backlash, and he was forced to either quickly walk back his comments or just quiet down.

So why should we expect different of Hollywood? The industry, whose job it is to reflect the public mood so as to capture their dollars, has been more than happy to buy into the assumption that racial strife is largely behind us. 42 may actually be the most progressive mainstream film about racial politics in the Obama era, although that’s not saying much. Both The Blind Side and The Help promoted an historical look at racism in America; their heroes relied on white protagonists – played by megastars Sandra Bullock and Emma Stone – to lift them to freedom. The implication is that the politics of today have rectified racial strife in our past, a comforting but nonsensical leap of logic. 42 has its white savior, as well – Rickey, the crusty, old team owner who insists on breaking the color barrier – but at least Jackie Robinson is the star of his own film. Rickey is only a supporting character, and that alone makes 42 more probing than the others. 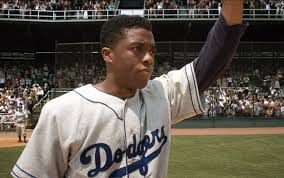 But compared to the films of the pre-Obama era, 42 still scans as deeply conservative. At the end of the Reagan era, black, urban Americans had many voices in film. John Singleton and the Hughes Brothers achieved mainstream success with their tales of the inner city like Boyz N the Hood and Menace II Society. Of course, Spike Lee held the mantle of the chronicler of the black experience with films such as Do the Right Thing, Malcolm X, and Mo’ Better Blues. But today, none of them can be found. Singleton’s last hit was 2003’s 2 Fast 2 Furious. The Hughes Brothers have reverted to strict genre filmmaking, including this year’s awful Broken City. And Spike Lee has made only a single film in the Obama era, 2012’s Red Hook Summer, which got miniscule distribution and grossed less than $1 million domestically. Twenty-five years ago, Spike Lee said we had to throw a garbage can through a window to start a discussion on race; the hero of 42 is told to just keep his head down and work.

Of course, there are some who will argue that 42 is not really about race at all. The story of an oppressed athlete breaking down barriers to be the first of his kind is far more reflective of the current national conversation on LGBT rights than the one on race. We are expecting the first active NFL player to come out of the closet any day now; rumors suggest that four players may come out at once so as to share the burden. Between these developments and the recent end of “Don’t Ask, Don’t Tell,” the plight of gays in America today mirrors the plight of black Americans in the Civil Rights Era in some ways. But if Helgeland intends this subtext in 42, it still implies that the racial issues have in some way already been solved – that’s why they can be used as an example of oppression overcome. The awful truth is that if Washington and the myth-making machine in Hollywood continue to ignore the real issues of racial injustice, they probably never will be.