House Democrats are exiting stage left. Yes, Beltway pundits have noticed that an inordinately high number of veteran House Democrats have opted to retire this year instead of face another Congress under Republican control. The latest – and perhaps the most telling – is Rep. Henry Waxman, a 40-year veteran of the U.S. House of Representatives, staunch liberal, and key player in the passage of the Affordable Care Act. Waxman is the current ranking member on the House Committee on Energy and Commerce, and if the Democrats were to retake the house, he would regain his chairmanship of the committee. His exit cements the belief by many that Democrats don’t think they have a shot this November.

But there is another story here. Many political comedians have joked that Washington politicians should follow NASCAR’s lead and wear their sponsorships on their suits, be it patches for BP Oil, the coal industry, or Monsanto; Waxman’s patch would say Hollywood. His district stretches from Los Angeles’s South Bay up the coast to Malibu and from Santa Monica through Brentwood, Bel Air, Beverly Hills and into Hancock Park. He represents all the major studios and many individual Hollywood stars, so whoever wins his seat will end up doing the movie industry’s bidding for basically as long as they want to be in Congress.

Here is a little more from The Hollywood Reporter:

Its constituents include not only stars, executives and agents but also such Democratic financiers as Jeffrey Katzenberg and Haim Saban.

“If you look at Obama’s contribution reports, this district accounted for a large amount of what the president raised,” says political consultant Rick Taylor. “It’s not an easy district to represent, but it will be intensely sought-after.” Indeed, three ZIP codes in District 33 — Beverly Hills (90210), Pacific Palisades (90272) and Brentwood (90049) — were among Obama’s top five 2012 fundraising zones in California, with more than $2.5 million raised.

The article goes on to list several contenders for the seat, but what’s illuminated here is how much Democrats have come to rely on Hollywood, the one industry that doesn’t support the GOP, for fundraising. Anecdotes from the last campaign cycle bear that out. In 2012, actor George Clooney hosted a mega-fundraiser for Obama at his home in the Hollywood Hills. The event, which was attended by dozens of A-list celebrities including Billy Crystal, Robert Downey, Jr., Tobey Maguire, Barbra Streisand, Salma Hayek, and Jack Black, brought in $15 million for Obama’s re-election campaign. Later that year, Clooney hosted another fundraiser for the president in Geneva, Switzerland. 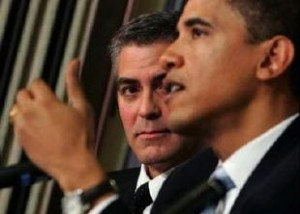 This year, Hollywood stars have set their sights on Sen. Mitch McConnell, the Senate Majority Leader who is facing a tough re-election campaign against Kentucky Secretary of State Alison Lundergan Grimes. According to The Hill, celebrities such as Danny DeVito, Jack Black, Jon Hamm, Nicolas Cage, Jerry Seinfeld, and Leonardo DiCaprio have all contributed the maximum amount allowed under federal election law to the Grimes campaign.

Since Waxman’s district represents the Democratic fundraising base, whoever wins that seat will immediately become a player within the party. Since the seat is so highly-coveted, expect a crowded field and an ugly, tense race. The winner will surely emerge with some battle scars, but he or she will also have a fairly straight shot to Democratic leadership.