Last week, the new trailer for Mortdecai was unveiled, and we got a better look at the lead character played by Johnny Depp. In some ways, he appears to be a typical Depp weirdo: eccentric, charming, a bit annoying, but mostly harmless. More notably, the character feels awfully familiar. Wasn’t it just earlier this year that we got to know another impeccably dressed, debonair, moustachioed art aficionado with an old-world charm and a way with the ladies? I’m talking, of course, about M. Gustave from Wes Anderson’s The Grand Budapest Hotel. While Mortdecai seems a bit broader than Anderson’s film, the character is a spitting image. He even seems to have a habit of calling people “darling,” and both films revolve around a stolen painting.

But the plot thickens: Depp was originally slated to play Gustave, according to reports in the summer of 2012. Neither Depp nor Anderson denied it at the time, indicating that the two were at least discussing the project. Several months later, Anderson publicly denied that Depp would be cast in the movie, chalking it up to internet rumor (but notably never denying that they had been in talks). Of course, he eventually found his perfect Gustave in Ralph Fiennes, and the following summer, Depp announced he would be bringing Mortdecai to the screen, as both producer and star. 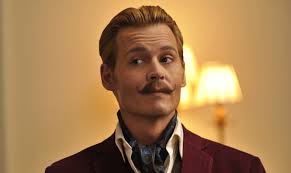 All of which begs a question: How did Depp end up playing a character so similar to Gustave, a role he was once linked to? Coincidence is always a possibility, but since both films are mysteries, they are practically begging us to investigate. Here are a few possibilities:

Possiblity #1: Depp was already considering playing Mortdecai when he met with Anderson about Grand Budapest. Although he liked the role and wanted to work with Anderson, he ultimately felt the characters were too similar, and he chose the more commercial project. The only problem with this theory is that the timeline is a little off. Anderson announced he had not cast Depp in September 2012, while Depp did not sign onto Mortdecai until July 2013. Still, it is possible he and Koepp had already had discussions about it.

Possibility #2: Depp met with Anderson and was impressed with the character of Gustave, so when Mortdecai presented itself, he simply took Anderson’s ideas and used them on a similar character. In this scenario, we cast Depp as a creatively bankrupt actor so desperate to regain his credibility he is willing to steal from of our century’s most revered filmmakers.

Possibility #3: Anderson is the thief. He read the Mortdecai books and modeled Gustave after the character created by the late author Kylie Bonfiglioli. When Depp realized this, he immediately decided against working with Anderson and went off to make his own, more honest adaptation instead.

So which possibility is the most likely? Here is where it gets tricky, as we will have to divorce ourselves from our preconceptions of the players involved. Over the last two decades, Anderson has fostered a reputation as a truly original talent. Even if you don’t love his films, you probably respect his dogged commitment to realizing his own unique creative vision, and it’s hard to imagine that he would blatantly rip off the very well-known novels. Then again, his films are often a pastiche of influences, and it is certainly possible he was unconsciously inspired by them. 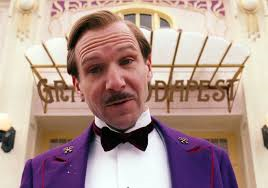 On the other hand, most film critics and serious fans have a mixed opinion (at best) of Depp, with the prevailing consensus being that the once-legendary actor has fallen into a artistic rut and is now more interested in selling tickets (and buying islands) than making great films. It is tempting to assign Depp the role of bad guy in this scenario, but would he actually commit such a blatant act of betrayal? Hard to say, but since many of his former fans feel betrayed by his recent career choices, the narrative is a cozy fit.

But there are still lots of unanswered questions here, most of them revolving around why Depp left the Budapest project. Was it his choice or Anderson’s? Did they part amicably? Did Depp have an axe to grind? Or did he simply steal Anderson’s idea and make it more commercial? The truth may never come out, but let’s look on the bright side. The fact that both actor and director were interested in similar projects at the same time hints at a creative synergy that, if they ever do decide to work together, could pay dividends down the line. In other words, it is clear that Depp and Anderson are on the same page. The only problem is we don’t know who wrote the book.