In the 1960s and 1970s, Americans flocked to spaghetti westerns like The Good, the Bad, and The Ugly and The Outlaw Josey Wales . These films subverted the morality of classical westerns by depicting vicious worlds that went without heroes. Compared to their predecessors in the genre, they were far more violent, with an amorality reflected the darkness of their times. Their audience was a generation that grew up cynical following the Vietnam War, the assassination of peace-loving leaders like Robert Kennedy and Martin Luther King, and, eventually, the Watergate scandal, and the spaghetti western reflected their disillusionment. It was hard to see any hope for the future in their dark and dusty onscreen worlds, which made every tiny scrap of humanity displayed onscreen stand out.

Logan, the new and perhaps final Wolverine movie starring Hugh Jackman, is a superhero flick that thinks it’s a western. The obvious reference point here is Shane. There is a violent sequence at a family farm that recalls the great 1953 western, and, for those who don’t get subtlety, there’s one scene in which the characters literally watch Shane on a hotel room television. But I thought more about spaghetti westerns when I was watching Logan, a film whose superhero is more of an anti-hero, and whose setting reflects our own troubled, amoral times.

Wolverine has always been a reluctant superhero, but he’s never had a less grandiose job than he does at the start of Logan. When we catch up to him, he’s working as a chauffeur, toting around drunken groups of young men and women for a few bucks. He uses that cash to take care of his old mentor Professor X (an affecting Patrick Stewart), who is suffering from some sort of dementia. Caring for an older loved one is always difficult, but tending to the world’s most powerful brain as it starts to deteriorate presents some unique challenges. The professor is also prone to seizures, which have a literally paralyzing effect on those around him. Logan spends his free time retrieving the old man’s medication, and making sure that X’s albino nurse (Stephen Merchant), a former mutant tracker for the government, keeps him alive. 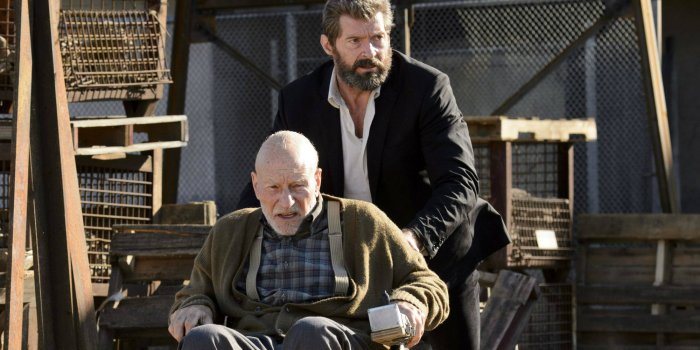 This isn’t Tuesdays with Morrie, however, and it wouldn’t be much of a western if trouble didn’t come a-calling. A young, silent girl from Mexico shows up on Logan’s doorstep, and when a cadre of bad guys dressed in black and sporting enormous guns come to retrieve her, we learn that she has more in common with Logan than her bad attitude. From there, Logan morphs into a road movie, as  Logan and Xavier try to get this dangerous young girl – who might as well be Logan’s daughter – to a sanctuary in Canada, using only coordinates found in an X-Men comic book (yes, they exist in this world) as their guide.

Now, we’ve seen gritty superhero movies before (The Dark Knight) and we’ve seen violent ones (Deadpool), but rarely have we seen one this violent and this gritty, while simultaneously feeling like the most authentic depiction yet of a well-tread superhero character. In previous films, Wolverine’s animalistic nature only shows up for a few fleeting moments. In last year’s X-Men: Apocalypse, he was literally let out of a cage just to kill a few nameless bad guys and run off into the forest, an apt distillation of how his unique sensibility has been used over the course of the long X-Men franchise. Here, finally, is a film that embodies and embraces his brutal, tortured spirit, and its grisly violence will surely be the stuff of dreams for longtime fans of the character.

That’s not to say it’s an easy watch, or always an engaging one. Seeing so many people die onscreen – and in such gruesome ways – has a desensitizing effect, which might be okay if the film didn’t also want us to care deeply about its characters. This is a trend in recent films. Movies like John Wick and its recent sequel rack up huge body counts but have a sentimental core. Some people seem to be okay with it. Watching Logan, I found myself shutting down fairly early on after seeing so much blood spilt.

Then again, maybe that’s appropriate. The character of Wolverine was originally conceived in the early 1980s, and was widely seen as part of a trend of anti-heroes that followed the Vietnam Era. For the first time ever, America had lost, and characters like John Rambo, Travis Bickle, and Wolverine were bellicose responses from the male id, threatened by their newfound vulnerability. These characters committed horrific acts of violence and asked for sympathy at the same time.  It was complicated.

These days, Logan, John Wick, and others (perhaps Hacksaw Ridge) speak to an audience struggling with the same contradiction, which might explain the heavy political subtext written into the script by Mangold, Scott Frank, and Michael Green. The notion of a Mexican girl crossing America to find sanctuary in Canada feels politically pointed, as does a weird subplot about genetically-modified food (related to the farm scene). With such threats polarizing the nation and partisan tension at seemingly all-time highs, many Americans may in fact feel torn between a violent rampage against their enemies and staying home and tending to their beloved family members.  Maybe the problem wasn’t that filmmakers kept getting Wolverine wrong. Maybe his time just had not yet come.