For the last 10 weeks, I have sat down to prepare to watch “The Newsroom” at 9:55 pm. Each time, I have caught the last few minutes of “True Blood.” I have never seen a full episode of “True Blood,” and I don’t know a soul who watches it on a regular basis. But for five seasons and counting, the show has been part of HBO’s esteemed Sunday night lineup, so I can only assume that its fan base is small but extremely loyal. I don’t know if I’ve ever met your average “True Blood” viewer, but I know they are out there, and while the show may not be making much of an impact on our culture at large, it must be some kind of delicious guilty pleasure for a niche audience.

As the inaugural season of “The Newsroom” draws to a close, as I watched Jim and Maggie continue to speak in code over a love that dare not speak its name, Reese Lansing get scolded by his mother, and Will and MacKenzie win the professional battle of their lives but still be too bull-headed to have a good old-fashioned smooch session, it is becoming clear to me that “The Newsroom,” which we once hoped might become the second coming of “The West Wing,” is going to end up far more like “True Blood.” It is not going to be the big, important show of our era. The critics have already taken care of that. Even from the series premiere, critics called the show preachy and self-important. These critics were not wrong, and Sorkin addressed those criticisms (at least the first two) in subsequent episodes by having characters on the show make the same pronouncements about “News Night.” Will’s response? I don’t care if we are preachy and self-important. Maybe that’s what our country needs right now.

Despite its altruistic intentions, “The Newsroom” has always suffered from one very basic flaw in its structure and conception. We already know that Will McAvoy’s “mission to civilize” will fail. How do we know? Because here we are in August 2012, and nothing has changed. Starting the story of “The Newsroom” in 2010 was both a stroke of genius and a fatal flaw. It allows Sorkin to go back and fix the journalistic failures of the last two years, but it also sets a tone of defeat over the show because there has been no demonstrable improvement in the state of journalism by 2012 – TV journalists seem to spend more time analyzing campaign ads than unemployment data. They are also letting Democratic leaders goad them into talking about abortion instead of poverty. Likewise, our political system has not been improved – it appears that, for the first time in modern history, Congress will fail to pass a Farm Bill this year, and, oh yes, Congress has not passed a budget in three years. So however good we may feel about the victories of the “News Night” team, it is always tempered by the sad realization that their victories – and their have been some sweet ones in this first season – will always be fleeting.

To use the term “fatal flaw” in describing a series’ first season might imply that the show is in trouble. It’s not. Although it has been panned by critics – AVClub.com has reviewed every episode and has been particularly vicious – and was recently beat in the ratings by Bravo’s “Real Housewives of New Jersey,” Lifetime’s “Army Wives,” and an old movie on FX, the show has been renewed for a second season. It’s easy to understand why: shows on HBO do not need that many viewers. HBO does not sell advertising, and nobody is canceling their subscription because they don’t like “The Newsroom.” So it does not need to be “The West Wing.” It can just be a nice, little show with a niche audience, and maybe that’s all it ever will be.

Still, there is a broad swath of individuals out there who really hate “The Newsroom,” and part of that hatred is due to the differences between what “The Newsroom” delivers and what we have come to expect from TV drama. Ever since “The Sopranos” hit it big and changed the landscape of original programming on premium cable, TV dramas have largely consisted of people behaving badly. Or to put it more specifically, the more successful TV dramas have featured deeply complex lead characters who are trying to eke out a tiny bit of good in worlds that are deeply corrupted. But despite their ostensible explorations of morality in the modern world, these shows mostly just glorify bad behavior. “The Sopranos” made organized crime cool again. “Mad Men” brought back three-martini lunches and adultery. “Breaking Bad” may not exactly glorify making meth, but it has turned Walter White from an impotent, poorly-paid science teacher into a gangsta. In fact, the show’s creator always described the arc of the show as “turning Mr. Chips into Scarface.” His use of Scarface is telling; that character, played memorably by Al Pacino, has not a single redeemable feature. He has no goal but power; his business thrives only on the suffering of others; and he ruthlessly kills anyone who stands in his path. Yet watching the film, it is hard to escape the perception that Tony Montana is just really freaking cool, and “Breaking Bad” hangs its moralizing on the appeal of watching Walter White do a lot of things that we as a society frown upon but love watching.

On the other hand, “The Newsroom” is about people trying to be good – not cool – and what really separates it from these other, more popular shows is that glorifies good behavior. Success for these characters is not defined by achieving power or money or by any achievement really. Success is when they do the right thing when they have every incentive not to.  The moments that I will most remember from this season are those in which the news team reported the news well despite pressure to get ratings. When they got the oil spill right. When Don said, “A doctor pronounces her dead, not the news,” and Will told Don to punch him in the face if he ever said he wasn’t a news man. And when the Santorum staffer ripped Will a new one for assuming that because he was gay he should not care about any issues other than gay marriage. In these moments, “The Newsroom” told a truth, and all truths are worth telling.

But why is “The Newsroom” not as good as “The West Wing,” which had the same political perspective and same cadre of do-gooders fighting cynicism? One reason is that the characters in “The West Wing” were inherently interesting because of what they do. For political junkies, the dynamic in the White House is one of the great mysteries of life and public policy, and Sorkin traded on that inherent interest by creating a show that practically fetishized the White House. I remember that first scene of the first episode, in which each staffer gets a text message that “POTUS” has been in a bike accident. We met our characters who functioned more like a family than co-workers. But even better – this was a family who had the power to change the world. “The Newsroom” has none of these things. Since “Broadcast News” and “Switching Channels” (a lost classic if there ever was one), the TV newsroom is not a place that engenders much magic or mystery, so there is no behind-the-scenes thrill here. And as I mentioned above, we already know that “News Night” will not change the world. And these characters don’t particularly like each other – or if they do, they have a funny way of showing it.

Which brings us to one area in which “The Newsroom” fails completely:  its portrayal of how human beings who have romantic feelings towards each other interact. For a show that features two love triangles (well, one is a quadrangle actually), you would think this would be another of those fatal flaws, but the news portion of the show is strong enough to keep the show afloat while we struggle to care about these people who are so sharp in their work and such idiots in their love lives. As Will and MacKenzie, Jeff Daniels and Emily Mortimer come out of this season okay. They have enough of a spark to convince me that their relationship may actually mean something to me at some point, although the fact that it doesn’t by the end of the show’s first season is a bad sign. And yes, a big part of the problem is that MacKenzie, like most of the women on this show, is poorly written. She is a classic Manic Pixie Dream Girl, not a full, well-rounded character but only who Sorkin needs her to be at any given moment to further Will’s journey towards self-actualization. She is tough on him when she wants to be and a complete neurotic mess at others. At no point does she come across as someone who was embedded in Afghanistan for three years, and there are only sporadic moments throughout the season when she comes across as a believably competent news producer. But she is sweet and pretty and she inspires Will to be a better man, and Daniels and Mortimer sell the Sorkin banter pretty well. In some of their scenes together, I actually believe that they have real feelings towards each other.

That’s faint praise, I know, but it’s more than I can say about Maggie, Jim, Don, and Lisa. Their relationship trouble could be cleared up by one character simply telling another, “I like you.” That’s what a real adult human would do. But these characters continue to act like middle schoolers, and because none of them can articulate what they are actually feeling – to each other at least – their situation never changes. The end of the first season leaves them in almost the exact same position they were in when the season started – Jim loves Maggie, but Maggie is with Don. Sorkin seems to think that he has a good Ross/Rachel thing going in with Jim and Maggie, but I think he is missing a great opportunity. I would love to see them get together, only so Sorkin can explore how their relationship is affected by working together in such a high-pressure environment. That scenario has the makings of good relationship drama. What he gives us instead is just a couple steps removed from one of the stronger episodes of “Saved by the Bell.” 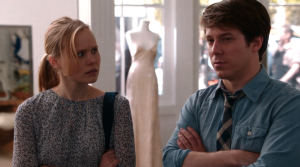 Despite these problems, despite the critical flagellation and humiliating ratings, despite the poorly-written female characters, and the pomposity and self-importance, “The Newsroom” deserves a second season. What’s more, it will probably get a third because, like “True Blood,” it will always have an audience: people like me. Left-of-center political junkies who treasure their sense of idealism. People who believe they can save a sinking ship. I would call them optimists, but most would call them romantics. Next season, I will sit down at 9:55 again every Sunday night to give me a little bit of hope that someone out there understands the failings of our government and our culture in the same way I do. And that sense of community, born out of courage and leadership in times of systemic moral failures,  gives me hope that things can change. So I guess you could call me Sorority Girl.

2 thoughts on “A Show Worth Saving: Final Thoughts on “The Newsroom,” Season One”