This is an introduction to the politics of “Parks and Recreation,” and it marks the first post of “Parks and Rec” Week here at Reel Change. Check back later this week for more analysis of the show, the fifth season of which premieres this Thursday at 9:30 on NBC.

My wife and I celebrated our second anniversary in June. As a gift, I arranged for her and her family to attend the U.S. Open in New York – a lifelong dream of theirs. I miss my wife terribly when she is gone, but, like most married men would, I was looking forward to three days of bachelor living. I planned to go to the driving range, have friends over to play video games, and sit for hours at a time reading in silence. Instead, what I did was watch the first four seasons of “Parks and Recreation.” I had never seen the show before because I don’t really watch TV shows – I’m a movie guy. But I read that the premiere of the fifth season (which airs this Thursday evening on NBC) would feature Sens. Barbara Boxer and John McCain, so I thought there might be something political about the show that was worth looking at. I wish someone had told me sooner.

On its face, “Parks and Recreation” is like any other contemporary sitcom – complete with wacky characters, love triangles, and multi-episode arcs.  And taken on this level, it is a very funny show. But it’s also more than that. At its most interesting, “Parks and Rec” is a full-throated defense of government and response to the Tea Party. It is a show with a purpose that could only have sprung from this particular place and time. It often peppers its story lines with references to current political event, but it is also about something much bigger than the politics of the moment. It is a passionate plea for tolerance, acceptance, and respect for public service. In other words, it is exactly what we need right now.

Even though the show as it was first introduced – a comic tour through varying attitudes about government, centered around Leslie Knope’s furiously optimistic bureaucrat – is set in the milieu of politics, the first season largely avoided overtly political content. Instead it focused on a single government project – Leslie’s quixotic effort to turn the Sullivan Street pit into a park – while introducing us to a series of characters we could not imagine we would grow to love so much. There is Tom Haverford (Aziz Ansari), the braggadocious office administrator who spends more time cultivating his image of being a “playa” than working; April Ludgate (Aubrey Plaza), the sardonic hipster college intern, who will go on to display the biggest emotional growth of any character on the show; Mark Brendanowicz (Paul Schneider), a down-to-earth city planner that Leslie slept with five years earlier and still harbors feelings for; Donna (Retta) and Jerry (Jim O’Heir), minor characters who have little dimension at the start.

In addition to the official Parks and Rec staff, two private citizens are also established as series regulars: Andy (Chris Pratt), the impossibly dumb but good-hearted musician, and his girlfriend Ann Perkins (Rashida Jones), the impossibly attractive Pawnee citizen who brings the issue of the Sullivan Street pit to the department’s attention.

But the breakout character from the first season was clearly Ron Swanson (Nick Offerman), the department’s director, whose depiction typifies the delicate combination of sharp satire and political inclusiveness the show would display more broadly in later seasons. Swanson, a carnivore, amateur woodworker, war enthusiast, and, most notably, self-professed Libertarian, is a brilliant and unique comic creation because of the inherent conflict in his role. His every professional action is driven by a political philosophy – supporting the smallest government possible –at odds with his job as director of a government department. Ron’s solution? To hire employees who are either completely incompetent (thus keeping the government dysfunctional) or are such go-getters they will do all the work that would normally fall to him (thus allowing him to keep his job without feeling as if he were, you know, working for the government). While most of the department’s employees would fit into the first category, Leslie is the best and only example of this second type, and her professional relationship with Ron – an appealing combination of comedic tension built on the differences in their personalities and genuine friendly feelings towards each other – is the most compelling thing about the show in its first season. 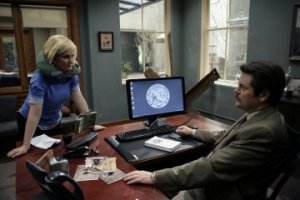 The second most interesting thing about the show is Leslie’s optimism. Right from the start, she is defined as fiercely, almost pathologically optimistic. Although we live in an increasingly cynical age (and television is our most cynical medium), there is precedent for basing a show around such a hopeful lead character. Michael Scott and “The Office,” to which “Parks and Recreation” was most often compared, spring to mind. But there is a clear and important distinction between the two. In “The Office,” Michael Scott was not the audience’s entry point into the story; instead, we identified most closely with Jim and Pam, making Michael’s boundless enthusiasm a bit of a novelty to the viewer. On “Parks and Recreation,” however, Leslie is the audience surrogate, so we have little choice but to share her optimism.

Of course, this optimism reflected a certain political reality. “Parks and Recreation” debuted in April of 2009, less than three months after President Obama took office. Its tone of optimism and support for government work could very well be seen as a reflection of the mood of America in light of Obama’s uplifting candidacy and election. Although Leslie was surely a Hillary supporter – her picture, along with those of other groundbreaking female politicians, adorns her office – she holds the office of the presidency in the highest esteem. It is, as she often tells us, her dream to be president. How often do you hear that from an adult? How often do you hear an adult say something positive and hopeful about politicians – instead of something cynical? But in the spring of 2009, hope and change were still in the air, and “Parks and Recreation” was borne from those collective feelings.

Although one could track the politics of the moment by following the progression of the series, it was the first season that set the overall tone. The show is committed to reflecting the inclusiveness that defined Obama’s presidency. On “Parks and Rec,” no other character in the show shares Leslie’s enthusiasm for government, but the series’ writers give voice to other perspectives. It is not surprising to see Leslie run up against general apathy – personified by both Tom and April – but the credence and air time that they give to the Libertarian philosophy is more unusual. Keep in mind that the conception of Ron Swanson came before that of the Tea Party – although not before Ron Paul – and while it is possible that his character was created in an effort to give conservative viewers something to latch on to, I prefer to think of it as an olive branch and a symbol of the dream of a Congress and a country that can work together, despite ideological differences. With Congress increasingly politicized, maddeningly ineffective, and facing record-low approval ratings, Leslie and Ron stand as a shining symbol of bipartisanship and friendship over stark party lines.

In fact, consider this idea: without either Leslie or Ron, the Pawnee Parks and Recreation Department would probably cease to function. Without Leslie, nothing would get done – ever. She is literally the only competent person in the department. Without Ron, Leslie would dramatically overextend the department with unnecessary projects and probably work her employees so hard that they would all quit. In this way, “Parks and Recreation” shows us that, contrary to what we see each election season (and increasingly, in non-election seasons), people with opposing political philosophies work well together. In fact, they actually complement each other – as long as they treat each other with respect. That’s the part we seem to be missing these days.

Stay tuned for more analysis on “Parks and Rec” Week here at Reel Change. For now, please enjoy the pilot episode of “Parks and Recreation.”