“The Master” opens on a shot of the marbled blue-white wake of a battleship, and director Paul Thomas Anderson returns to that image several times throughout the film. Soon, it becomes clear why; the image embodies the film’s subject, the muddled and mysterious history that we leave behind us, specifically the history of one sailor returning to America after World War II.

The young man in question is Freddie Quell (Joaquin Phoenix), a loner and an alcoholic, whose troubled mind has been further perverted by the fog of war. Every alcoholic has a past that is either the cause of their drinking or the result of it, and Freddie is no different. He works a series of odd jobs, each of which he is forced to leave due to his erratic behavior. One evening, he stows away on a luxurious yacht, where he meets Lancaster Dodd (Philip Seymour Hoffman), a “writer, a doctor, a nuclear physicist, a theoretical philosopher, but above all…a man.” He is also the charismatic leader of a mysterious movement known only as The Cause. There has been much speculation that The Cause is a thinly-veiled version of Scientology, and Anderson has confirmed that he was inspired by L. Ron Hubbard. But once the film takes flight, the comparison quickly recedes into the background. Hoffman’s Dodd is a unique creation, rife with contradictions, one of the many dysfunctional father figures that have dominated Anderson’s films.

But the dynamic between Dodd and Freddie is not as simple as that of a father and son. They complete each other like doomed lovers; Freddie is the tortured soul that Dodd has been searching to save, brought to him by chance or perhaps cosmic convergence. Even Dodd’s wife (Amy Adams) immediately recognizes that Freddie “seems to inspire something in him.” In many ways, “The Master” is a platonic love story between two deeply troubled men, both of whom need direction, neither of whom is qualified to give it.

After spending the day together aboard the ship, Dodd puts Freddie through his first “processing session,” in which he uncovers Freddie’s past traumas through an intense series of questions. It is the first of several masterful scenes between Hoffman and Phoenix, and Anderson wisely cedes it to the performers, letting the camera linger on Phoenix’s creased, expressive face for what seems like minutes at a time. 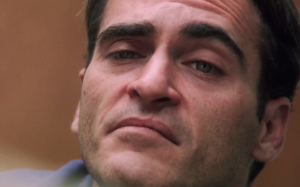 While Dodd takes Freddie under his wing and sets about “curing” him, we bear witness to his methods, which involve physically and emotionally breaking Freddie down. Both actors are tremendous, but Phoenix has the bigger haul, and he gives an exhaustive performance. Neither his face nor his body are ever truly at rest – he holds his shoulders in front of him as if constantly wearing a suit one size too large, and his facial muscles, even when still, seem to ripple with tension. Still, the crux of Dodd’s method is not physical; it is a journey back in time, through something similar to hypnosis, in order to access old memories from this life and from previous ones. He claims to be able to “time travel,” and his followers, hungry for answers, believe him.

At this point, I could not help but notice that Lancaster’s methods bear some similarities to Anderson’s, who is as much an historian as a filmmaker. In “Boogie Nights” and “There Will Be Blood,” he revisits and explores iconic periods in American history. His other films are set in the present but feature characters struggling to escape the ghosts of their pasts. His first feature, “Hard Eight,” tells of an aging gambler seeking redemption for his past crimes in an unusual way. Barry Egan in “Punch-Drunk Love” is in a state of arrested development, still stuck in the emotional patterns formed as the younger brother of eight older sisters. And nearly every character in “Magnolia” is seeking to find their own voice after years of being defined by feelings of abandonment. As several characters in that film state: we may be through with the past, but the past ain’t through with us.

“The Master” combines both ways that Anderson has previously addressed the subject of history. It is an inquiry into one man’s past but also a period piece, and the misc-en-scene is filled with authentic details that dig deep beneath the image of ‘50s suburbia that has become American legend. Many contemporary films, including “Far from Heaven” and “The Hours,” have sought to expose the emotional life repressed beneath the façade of post-war conformity. “The Master” never bothers with the illusion – instead, the details create a living world free from the confines of legend – and tells a story far more emotionally raw than we have come to expect from films set in that era.

But the question remains: why has Anderson brought us back to this time? What do we have to gain from examining this period in history? Freddie’s journey is meant to be representative of all who return from war – an early scene places him as just one in a room of soldiers, as they are warned of the difficulties they will have in returning to normal life after what they have seen. How will they reconcile the darkness of war with the light of post-war optimism? Anderson seems to think that in times of collective existential distress, we seek moral certitude wherever we can find it, and it is impossible to ignore the parallels to our current socio-political climate.

We can read “The Master” as an allegory that shows how contemporary America is adjusting to a new reality brought on by a different act of war – 9/11 – and how we have reacted to the destruction of our old moral order by clinging to new certainties. In one crucial scene, Dodd’s methods are questioned by a skeptic at a party. Their exchange, in which Dodd becomes increasingly agitated and defensive by a set of simple questions, reminded me of nearly every talking head I have seen on cable news of late – the kind of pundit that is wrapped so tightly in his or her narrow philosophy that real engagement becomes impossible. Freddie Quell gravitates towards Dodd’s certainty, but those of us who are desperate for such moral certitude today must choose between Glenn Beck and Bill O’Reilly or Rachel Maddow and Bill Maher.

Anderson is not one to imbue his films with lessons exactly, but the end result of Dodd’s work to cure Freddie of his ills is instructive. Freddie takes on many of the Master’s qualities and especially his contradictions – Dodd’s certainty begets Freddie’s fierce devotion to The Cause – but he never sheds the problems that led him there in the first place. He remains violent and impulsive, like a dog who is given enough food to stay alive but deprived of everything else. Through this tumultuous relationship between two very strange men, Anderson asks his audience what a person – and a nation – are to do when they come face-to-face with the world’s darkness. Anderson respects his audience too much to simply answer that question for us. The inevitable conclusion is that, more than sixty years after the era that the film portrays, we are still not ready to answer the question for ourselves.

24 thoughts on “Paul Thomas Anderson is a “Master” of History”