From Obama: 2016 to Argo, the movies of 2012 have been particularly heavy on political content, and naturally some pundits have wondered if a film can influence an election. It seems clear that many in Hollywood think it could – and they want nothing to do with it. Three political films originally scheduled to hit theaters this month have been pushed back to a post-election release date: Zero Dark Thirty, Red Dawn, and Steven Spielberg’s Lincoln. Spielberg, for one, has already stated his reasons for making the switch: he does not want to be accused of trying to influence the election results. It is clear that Hollywood still values its profits over activism.

But movies do have an influence on our lives and our choices – by reflecting and reinforcing the political ground that often quietly shifts beneath our feet. Therefore, it is more likely that a movie with subtle political content – instead of the overtly political Lincoln – could influence the electorate without being noticed. In 2012, we can point to not a single film but a series of films with strong female characters that have set the stage for President Obama to possibly win re-election with the largest share of women voters in history.

Among the highest grossing movies of 2012 are The Hunger Games, Prometheus, and Brave, each of which subverts traditional female archetypes. These films spread overt messages of female empowerment to mass audiences, but they were hardly the only films released this year to do so. Snow White and the Huntsman, a surprise hit, relegated men to secondary roles. Strong female characters were also featured in Mirror Mirror, Damsels in Distress, Beasts of the Southern Wild, Looper, The Master, and Won’t Back Down.  This trend reflects a significant cultural emphasis on gender equality, but there is one movie heavily marketed to female audiences this year that could have actually impacted the election – had it been properly harnessed by the Obama campaign.

When parsing cinematic trends for political impact, it is always wise to look for sleepers. These are the movies that connected with audiences far more than anyone expected them to, and they are the clearest indicator of cultural shifts. There was no bigger sleeper this year than Magic Mike, the crowd-pleasing dramedy about male strippers. The film massively outperformed industry expectations and exposed the existence of important new demographics for studios to cater to: women and gay men. In other words, Obama’s base.

In the 2012 election, LGBT rights and gender equality are the two issues on which the President can draw clear and distinct differences from his opponent. Obama, of course, ended “Don’t Ask, Don’t Tell” and earlier this year signaled his personal support for marriage equality. He has made even more headway on women’s issues. He signed into law the Lily Ledbetter Act, which creates greater protections for women to sue for sexual harassment. His signature legislative achievement, The Affordable Care Act, strikes a major and hard-fought victory for women by ensuring that contraception be covered by insurance plans. Further, it helps Obama that his opponent is particularly weak on this issue; it is, in fact, telling that “binders full of women” is a popular meme this debate season.

But the power of Magic Mike came in the way it was viewed. Women did not bring dates to it; they watched the movie with groups of other women, and groups of gay men did likewise. In neighborhoods with large populations of gay men, screenings became impromptu parties, and the New York Times reported that gay men were rushing to the theater in numbers not seen since 2005’s Brokeback Mountain. Women similarly saw the film as a shared cultural experience. A poll by the movie site Fandango reported that 87% of people who bought tickets in advance for the film were planning to see it with a group of women; 81% were 25-49 years old; and 77% felt that female-skewing movies have been lacking in Hollywood, indicating an engagement with the movie on a socio-political level.

The late-night comics had a bit of fun with the idea that the Obama campaign could use this year’s female-friendly movies to drive home his message. Conan O’Brien suggested that Obama make a campaign promise that his second term would include more Ryan Gosling movies. Jay Leno even superimposed Obama’s head on a male stripper’s body, a la Magic Mike.  But the comics were onto something: a major missed opportunity by the Obama campaign to rally their base and turn supporters into active volunteers. At these screenings, women and gay men engaged in a shared cultural experience, an invaluable tool in political organizing and one the Obama campaign should have exploited. I picture campaign workers handing out literature detailing his record on women’s and LGBT issues, as well as tables with volunteer sign-up sheets, particularly at theaters in gay communities – like Chelsea Clearview Cinemas in Manhattan, where Magic Mike played on four screens simultaneously. The campaign could have even bought internet ads targeting those who search for show times. Or even better: a campaign ad featuring Channing Tatum and Matthew McConaughey. 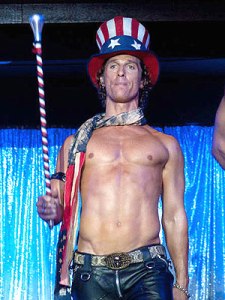 With so close a race and Obama’s base still somewhat discouraged, it is not too late for the campaign to capitalize on the success of Magic Mike. The DVD was released this week, and many ladies-only viewing parties are sure to follow. If Obama has any lingering doubts that his base will turn out for him, a couple of quick phone calls to Tatum and McConaughey to set up a campaign appearance could shore up his support.

And if he is not convinced, he need only look back eight years to a time when this same strategy was successfully employed. Obama’s situation is similar to that of George W. Bush in 2004, who needed to ensure that his evangelical base turned out in higher numbers than it had in 2000. Amazingly, Bush was able to harness a very dissimilar movie, The Passion of the Christ, to ensure that his base showed up at the polls. Earlier that year, the film had re-energized committed evangelicals, and it inspired moderate evangelicals – the ones who do not automatically vote Republican – to become more engaged in the religious community. As churches began promoting the film, they learned new organizing skills – ones that translate easily to politics. They trained volunteers to hand out literature in front of movie theaters and bussed their congregation members to private screenings.

Bush harnessed this enthusiasm by publicly expressing his desire to see the film – a rare declaration for a president. First Lady Laura Bush did the same. The former president also increased his use of biblical language in his speeches, especially those phrases that come directly from the Bible and function as code to devout evangelical audiences. These speeches were intended to capitalize on the renewed enthusiasm for their faith and its place in mainstream America that Passion generated in evangelicals.

So for Bush and his campaign team, Passion was a perfect storm of religion and politics. Whatever skepticism evangelicals felt about the political process was obliterated by their enthusiasm for the film and the former president’s renewed commitment to their values. Bush’s first-term record did not hurt either; he began a War on Terror that appealed to evangelicals’ newfound appetite for involvement in global events. He also found a wedge issue to get them to the polls. On the same day that Passion was released – Ash Wednesday, February 25 – Bush endorsed a constitutional amendment banning same-sex marriage.

With Passion as his backdrop, Bush won 78 percent of the white evangelical vote in 2004, with only 21 percent voting for Kerry. It was a 10-point improvement for Bush over his performance in 2000.

Obama is trying to employ the same strategy, capitalizing on a cultural shift by promoting his record on those issues. It is no mere coincidence that Obama appealed to his base earlier this year by publicly acknowledging his support of same-sex marriage. His strategy appears to be working; the race may be close, but current polling shows a gender gap that rivals the largest in history. One recent poll even gave Obama a 17-point lead among female registered voters. If Obama can get them to the voting booths – which some Magic Mike-themed campaign events would surely help with –  he seems assured of victory. In an election this close, even a movie about male strippers can make the difference between a president who will be remembered as a blockbuster sequel rather than a one-term flop.