Flight has been pitched to the general public as the kind of adult drama that doesn’t get made much anymore, and the first scene of the film confirms that assertion. It opens with a close-up of a naked woman. We zoom out to see a hotel room in a state of post-coital disarray – empty beer bottles, lines of cocaine, and a half-naked Denzel Washington nursing a first-class hangover. Washington’s character argues with his ex-wife on his cell phone, while snorting a pick-me-up line of coke to start his day. After three motion-capture family movies, director Robert Zemeckis is underlining and italicizing his intentions: this is a movie for adults.

But Zemeckis (Back to the Future, Forrest Gump) has always been an artist of hopeless optimism, and he cannot sustain the darkness promised in this opening scene. Over the next two-and-a-half hours, Flight slowly descends from a dark, nuanced character drama into an after-school special on alcohol abuse. Washington’s pilot, Whip Whitaker, is in his late forties but still acting like a teen rebel. He lives on the edge, both in his personal and professional life, with little respect for himself or the world around him. Still drunk and high the morning the film opens, he pilots a jet through a dangerous storm upon take-off then proceeds to pass out in the cockpit. Starting its descent, the plane malfunctions and heads into a dive. With his emotions effectively diluted by intoxicants, Whip masterfully and miraculously pilots the plane to an emergency landing in a field.

Upon waking in a hospital room, Whitaker is pronounced a hero, but the doubt is already creeping across his eyes. Did his intoxication have anything to do with the flight? Will the public find out who he really is? The confluence of the crash and Whitaker’s alcoholism nicely dramatizes an addict’s most basic fear – of being found out.When an investigation is launched, Whitaker’s lawyers urge him that to maintain his credibility, he cannot be seen buying or drinking alcohol. Under the pressure of a federal investigation and the threat of potential prison time is probably the most difficult circumstance under which to kick a serious addiction. It is no surprise that Whitaker quits and then relapses several times in the course of the film; mind you, I do not believe that President Obama really quit smoking in his first term either. 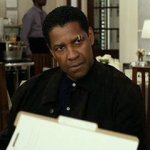 While various characters come in and out of Whitaker’s life, including a recovering heroin addict with whom he has an affair, the film belongs to Washington, and it is only on the strength of his performance that it succeeds at all. Washington is a true movie star – maybe the last one – and he compels the movie forward through sheer charisma and force of talent. Zemeckis surrounds him with capable character actors like John Goodman, Bruce Greenwood, Don Cheadle, and Melissa Leo, but in the end, none of them can overcome the banality of the script. If you take away the riveting crash sequence, Flight reveals itself to be a tired story of addiction and denial, not unlike Days of Wine and Roses or When a Man Loves a Woman. Whip’s journey may ring true, but it simply has no sense of urgency. We have seen the functioning alcoholic on screen before, and while the metaphor of Whip’s profession resonates – his whole life is a controlled crash – it is not developed throughout the film. Even its much-praised crash sequence, while gripping, breaks no new ground. Zemeckis himself did it just as well in Cast Away, and Paul Greengrass surpassed it with the realism of United 93.

Flight has a number of serious flaws – its attempt to shoehorn in reflections on God and coincidence are particularly cloying – but its basic failure is its inability to make the events it depicts seem real. This is not because this story could never happen; just last week, my wife and I were in an airport, and we casually noticed that the pilot who was chatting up one of the flight attendants appeared to be tipsy. But in trying to create a universal story of addiction and greed, Zemeckis and his screenwriter John Gatins fail to give us the kind of details that flesh out a character. Mind you, there is plenty to chew on here. Is alcoholism rampant among pilots? Does the stress of the job contribute to his addiction? Ultimately, the question I most wanted answered was: who is Whip Whitaker, besides an addict and a pilot? Washington does his best to inject some humanity into the archetype, but the movie is uninterested in his efforts. In a film with a subject of this complexity, there are multiple opportunities for the filmmakers to challenge the audience, but with very few exceptions, Zemeckis is content to just tell us what we already know.

Flight serves a function that will always have some use – to educate the public about addiction – but there are better uses for your hard-earned eleven dollars than a two-and-a-half hour public service announcement.