Conspiracy theorists, start your engines. When early front-runner Zero Dark Thirty won but one Oscar on Sunday night, it marked quite a fall from grace. For most of awards season, it was the prohibitive favorite for Best Picture, Best Director, Best Actress, and most of the technical awards. Of course, we all know what happened. A major controversy arose surrounding the film, involving the filmmakers’ perspective on torture and the filmmakers’ overall adherence to the facts. U.S. Senators Dianne Feinstein, John McCain, and Carl Levin publicly condemned the film for erroneously suggesting that torture played a key role in the killing of Bin Laden. The Senate Intelligence Committee jumped in, promising to investigate whether the CIA had shared classified information with the filmmakers. After being rebuked by the U.S. Congress, it was a fait accompli that Oscar would not come calling ZD30’s name.

There were still some rumblings that Jessica Chastain might win Best Actress or that Mark Boal would get chosen for his screenplay. But neither ended up winning, and as a bit of cruel and unusual punishment in itself, the film’s lone award was shared: it tied with Skyfall for Best Sound Editing.

And so it seemed a simple equation. The film was a technical and dramatic marvel, but its politics were too controversial for Oscar, who usually prefers to play it safe.

But then something strange happened. Last night, the Senate Intelligence Committee admitted that it had suddenly dropped its investigation of the film. Maybe it’s just a coincidence, but it is hard not to read this development as being connected to ZD30’s terrible night at the Oscars. Perhaps the committee simply felt that the film’s poor showing on Sunday night was punishment enough, although that would seem to acknowledge that their goal was to damage the film’s reputation. Of course, it’s not the job of Congress to decide the Oscars.

But then the wheels start churning. Is it possible that there is a larger conspiracy at play? Was the Senate Intelligence Committee’s threat to investigate ZD30 part of a larger campaign by another film that felt threatened by the ZD30’s success? Was Congress used as a tool to fix the Oscars?

I know. It sounds crazy. But let’s remember just how closely President Obama is tied to some of the biggest players in Hollywood. In running for re-election last year, Obama realized he would not be able to rely on most major industries for campaign contributions against the pro-business Romney. The movie industry, which still tilts firmly to the left, had not given up on him, and he milked studio executives and Hollywood celebrities for every last dollar. Is it so hard to believe that Obama, who was re-elected on the backs of Hollywood donations, would be willing to lean on a few senators (2 of whom were Democrats, and the other of whom, because he had such a strong, personal version to torture, likely needed no convincing) to investigate a film that was in competition against a close, personal friend of his? But who would this friend be? What Hollywood celebrity had a film in competition against Zero Dark Thirty and also could be considered a close, personal friend of President Obama’s? 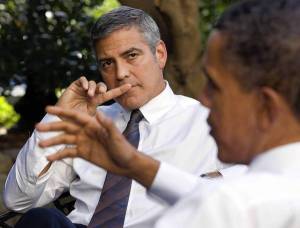 George Clooney and Barack Obama are tight, and two days ago, Clooney was onstage accepting the Best Picture Oscar for Argo, a film he produced. The actor also hosted a mega-fundraiser for Obama at his home in May of 2012, attended by dozens of A-list celebrities including Billy Crystal, Robert Downey, Jr., Tobey Maguire, Barbra Streisand, Salma Hayek, and Jack Black, The event raised more than $15 million for Obama’s re-election campaign, making it likely the biggest fundraiser of Obama’s career. Later in the year, Clooney hosted another fundraiser for Obama in Geneva, Switzerland; this one took in only $625,000. But their friendship runs even deeper than dollars and cents. Earlier last year, Clooney came to Washington to testify before the Senate Foreign Relations Committee about the conflict between Sudan and South Sudan. While he was in town, he also dined with the Obamas (at their very table) at a state dinner for British Prime Minister David Cameron and met privately with Obama in the oval office. I wonder what they talked about.

Listen, I know this sounds a bit silly, and I’m pretty sure there is nothing to this. The timing of the Senate Intelligence Committee’s announcement is unfortunate. But the very fact that we can even speculate about the possibility of coercion of this extent between Hollywood and the President speaks to how deeply these two industries have merged. In the run-up to the Oscars this year, the filmmakers behind nearly every Best Picture nominee came to Washington to get press for their film. Argo, Zero Dark Thirty, and Lincoln were no-brainers. But the creator and star of Silver Linings Playbook even got in the act; Bradley Cooper and David O. Russell had an official sit-down with Vice-President Biden to discuss mental health reform. Even Beasts of the Southern Wild got a White House screening and earned words of praise from the First Lady.

Argo, of course, was a love letter to both Hollywood and Washington, so perhaps it was destined for a Best Picture win all along. Or maybe – just maybe – Barack found a way to pay back his good friend George for helping him retain his job last year. We’ll probably never know, but the fact that we’re even asking speaks volumes.

One thought on “Did Obama Rig the Oscars?”