The trailer for The Butler is out. Having criticized the casting on several occasions already, I thought I should weigh in. First, watch the trailer:

So this is one of those “Magical Negro” stories, huh? For the uninitiated, the Magical Negro is a stock black American character in film who exists only to help out the white people around him, often through supernatural means. Examples would include Michael Clarke Duncan in The Green Mile and Will Smith in The Legend of Bagger Vance. Often in these films, the white protagonist learns something about the black experience through this character, although the focus is usually on what the Magical Negro teaches them about themselves. So what’s wrong with a black guy helping a white guy, you might ask? Cultural critic Touré said it best: “While some may think it complimentary to be considered ‘magical,’ it is infantilizing and offensive because it suggests black excellence is so shocking it can only come from a source that is supernatural.”

Now, the difference here is that The Butler was made by a black director, Lee Daniels, who also directed Precious: Based on the Novel Push by Sapphire. Several serious black actors, such as Forrest Whitaker and Oprah (yes, she was once a serious black actor), are involved. It will be interesting to see how this all plays out, and it looks like the type of film that at least will provoke more discussion on the way race in America is depicted on film.

A few quick hits on the casting:

– I’m still not totally sold on Alan Rickman as Ronald Reagan. The one image they showed of him was pretty uncanny, and I know that Rickman is a great actor, but why didn’t they show us more? WHAT ARE THEY HIDING?!

– Obviously, James Marsden as JFK will be fantastic.

– The guy who plays Martin Luther King, Jr. looks just like him, too.

– Too early to say on John Cusack, Liev Schreiber, Robin Williams, and Jane Fonda. I remain cautiously optimistic about Williams as Eisenhower, but the rest are anybody’s guess. 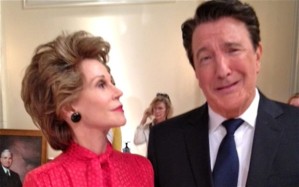 One thought on “The Trailer for “The Butler” is Out, and it Looks Kinda Lame”