This interview is the third and final article in my series about “The Attack,” which opened in New York and DC this past Friday. It expands to several more cities next weekend. You can read my review at the Washington City Paper and an essay at Film School Rejects.

Ziad Doueiri is an award-winning filmmaker, who has previously directed “West Beirut” and “Lila Says.” He spoke with me over the phone on Wednesday, June 19.

Noah Gittell: First of all, I want to thank you for this film. I write about film and politics almost exclusively, and I often write about how the worst way to make a political movie to to write about the politics. I think it’s almost always more effective to make a movie about people who happen to be in a political situation, and I think your film and your commitment to telling a personal story about Amin is an example of how that is done well.

Much of the press that I’ve read about the film has been about the Arab League ban, and I’m sure you were disappointed by that, but it did raise a question for me as I was watching the film: did you have an ideal audience in mind?

Ziad Doueiri: To tell you the truth, when you sit down and write, you just think about the screenplay itself. You think about how I’m going to shoot the film, and how can I make the story work this way or that way. I did not think of a particular or ideal audience, but you can’t help but think from time to time about one particular scene and say, “I wonder how the Arabs are going to react to that,” and then you write another scene, and you say, “I wonder how an Israeli or a Jewish audience is going to react.” It doesn’t mean that it pushes you to self-censor, but you are aware that there are things some audiences are not going to remain indifferent to.

NG: You know, as an American, I actually  related to Amin quite a bit at the start of the film because, like him, I feel somewhat removed from the violence of this conflict. It helped me relate to the character, but it doesn’t sound like there is a particular message you want Americans to take from the film.

ZD: I assure you not. If you sit down and start writing because you have a specific message to send…

ZD: Exactly. You’re gonna screw yourself up, no matter if you are extremely pro-Israeli or pro-Palestinian. If you do it for message’s sake, then you’re killing the drama.

NG: Now  I understand that you moved back to Lebanon after 9/11. Is that correct?

ZD: 9/11 actually…if it changed it, it’s pure coincidence. It’s not like I decided to move back to Lebanon after 9/11 because I was sick of being an American. That’s not at all how it happened. What happened was very strange. I was writing a screenplay that takes place in the Middle East, and I had to spend some time back in the Middle East to do some research about it. And two weeks before 9/11, I finished that screenplay, and when 9/11 happened, I knew that the screenplay would not work. Nobody would want to do that film. That’s it. And then I was lost in terms of career direction. I said, “Okay, where am I gonna be?” And I just fell in love with this girl, and I said “What do you want to do? Do you leave the girl and go back to America, or do you bring her back with you?” There were a lot of questions I was asking, and that girl turned out to be the co-screenwriter with me on all those movies. It’s a series of events that led me to settle down in Lebanon for a little bit.

NG: I’m glad you clarified that because I think when people see in your biography that you moved back to Lebanon after 9/11 they draw a lot of conclusions from that.

ZD: You’re right, it should be clarified, but the truth is so anti-climactic! 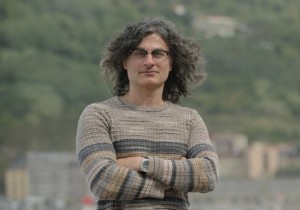 NG: Some of my readers, as you might imagine, are very big Quentin Tarantino fans. I know you were part of his regular camear crew before you moved back to Lebanon. Are there any specific lessons that you took from working with him, or perhaps anything that you have chosen to do differently?

ZD: It’s difficult to pin it down to one thing. Quentin has certainly influenced an entire generation of filmmakers. His compulsive dialogue, his nifty situations…I worked with him on five movies, and I got to know him on a personal level. The thing that I like the most about him is his essence. It sounds silly, but it’s the truth: it’s his enthusiasm for cinema. When he’s on set, he’s just like a little kid. He’s so compulsive about making the movie itself. It is so inspiring. It’s not about media, or about relationship to the studio, or the politics in the world. He doesn’t give a shit. He only likes to make movies, and his enthusiasm creates a vortex on the set so that everybody becomes involved. He’s one-of-a-kind. But is he the biggest influence on my film career? No. Ron Fricke is, yes. Not Quentin, but he has certainly contributed in certain things.

NG: So Quentin is obviously famous for his use of violence in film, and here in the U.S., the subject of violence in media has become a subject of contention, especially after our recent shootings. And I noticed that despite the violent subject matter in The Attack, there is no violence onscreen. Was that a conscious choice or something that came organically from the story?

ZD: I think it came organically. I had a couple of violent scenes that I regret cutting, actually. But I cut them for budget reasons, and I didn’t have enough money to shoot them. This film is much more psychological, and we wanted to see the journey of this man, understanding the complex, ambiguous love story. It doesn’t meant that I don’t have violent tendencies. I do have a lot. I am a radical person. I am an extremist in certain views.

NG: I think that not having violence in the film may have had a positive impact on me. Nothing in the film feels sensationalized, and we have a tendency – at least in America – to enjoy violence onscreen, even if it’s not meant to be enjoyable. The impact of the violence in your film is felt so deeply and personally by the audience that there is never a risk of enjoying it.

ZD: So you are saying you did feel some violence, but it’s underlying?

NG: Absolutely. The violence is lurking behind every scene, but it is never enjoyable. And for this film, it worked.

ZD: I have to give credit to the author of the book. He really did a great job. It is a very complex novel, and it was a challenge.

NG: Did you work with him on the screenplay at all?

ZD: Not at all He did not get involved. He saw the film, and then made his comment, and that was it.

NG: Getting back to your influences for just a moment, one of the things I loved the most about the film is that in the second half when Amin travels to Palestine, it feels as if it morphs into a film noir detective story almost. How did you arrive at that approach, and do you count film noir among your influences?

ZD: Yes, and I think one of the things that compelled me the most during the reading of the book wad that detective work. I kept wanting to elaborate. Do you remember that interrogation scene with the Shin Bet officer?

ZD: 10 or 11 minutes. I got to a point where I couldn’t stop writing that scene. It was upto half an hour at one point. I was so obsessed with that interrogation that I had to cut much of it out. Yasmina Khadra, the novelist, was a member of the Special Forces in the Algerian army, and he did a lot of interrogation also. It’s coming from someone who has a lot of experience with it. When I read the book, I was fascinated by the thriller aspects. The Palestinian-Israeli conflict is important in the book, but it’s background. All the other elements that I worked on – the love story, the mystery, the thriller – more than just the MIddle East. It’s all part of it. You can’t deny one from the other.

NG: I loved during the end when Amin has kind of run into a dead end, when we see him in the diner smoking a cigarette. It felt like something out of a Sam Spade movie, and I just loved what that implied – that, like all film noir heroes, this was a man searching for the truth – and how you connected it to other film noirs.

ZD: You know when he takes a cigarette and sits down, I wanted to show that this guy is losing all his reference. He’s a doctor, you know, normally doctors don’t smoke. But his life has become such turmoil that he doesn’t give a fuck. He lights a cigarette. You know, it’s not gratuitous. We purposefully gave him a cigarette.

NG: One last question – what have you got lined up next?

ZD: I’ve got two screenplays, two stories that I wrote, that also take place in the Middle East. But my producer called me into his office last week and said, “Look, Ziad, financing films about Middle East is a pain in the ass. Difficult to finance, difficult to market, difficult to promote. Why don’t you take a break?” And I really thought about it. I sat down with my wife who I write with – that woman that I met – and I said, “My producer is saying I should take a break.” She said, “I think it’s a good idea.” I have other stories to tell, even though I am excited about those two scripts, but I think I’m going to have to take a pause because it’s a difficult process.

NG: Well, I think you’ve made a great film, and I, for one, am very glad you made it. I hope a lot of people see it.

ZD: Thank you so much. Meet you again, hopefully.