After last year’s uneven initial season of The Newsroom, there was a lot of chatter in the industry that there would be big changes before it returned. To be certain, some changes were needed. Even those who liked the show, like me, acknowledged its faults. The show teased viewers with its compelling revisionist take on the failures of major news outlets but ultimately frustrated them with creator Aaron Sorkin’s insistence on covering love triangles no one cares about and poorly-written female characters.

But they said this season would be different. They – HBO suits, that is – said the famously obstinate Sorkin had really listed to his critics. They said the female characters would be stronger, and the personal relationships would be tightened up. I, for one, was skeptical, but I really wanted to believe. There were moments last season that made me sit up and take notice, and I wanted more of them. 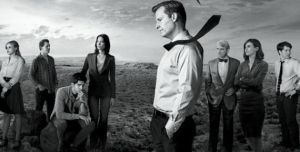 On Sunday night, season two arrived. We’ve got good news and bad news, and they’re both the same: nothing has changed on The Newsroom. Of course, the second season premiere had flashes of compelling television drama. Sorkin has created a nice framing device that leaves lots of questions that I want answered: What is Operation Genoa (or is it Geneva)? What happened to Maggie’s hair? Do Don and Sloane end up getting together?

Okay, I actually don’t care about that last one, nor do I care about Jim and Maggie or for that matter Will and MacKenzie. Sorkin continues to ignore the lessons of The West Wing, which built a slow burn of flirtation between Josh and Donna for nearly three seasons before you even realized the two were attracted to each other. In season one of The Newsroom, Sorkin created a tangled web of attraction between a handful of people we barely knew, and, as a result, we barely cared. He’s up to the same tricks in season two, as Jim goes off to New Hampshire to cover the most boring campaign in history, and Don breaks up with Maggie when he learns of her unrequited love for Jim from the internet. Tip to Sorkin: don’t bring back season one, even in a YouTube clip.

But then there is the greatness, like the wonderful, quiet acting of Sam Waterson and Jeff Daniels in the scene when Charlie tells Will he’s taking him off of the 9/11 10th reunion coverage until the heat dies down from Will’s insensitive comparison of the Tea Party to the Taliban. It’s a great moment of respect and honesty between two long-time colleagues, the kind Sorkin rarely – if ever – writes for women in this show.

He did throw his critics a bone with the opening newsroom scene, in which MacKenzie, whose ditziness in season one seemed to contradict her identification as a hardened war reporter-turned-producer, quickly and competently deals with a staff screw-up by calling a reporter on his cell phone at a restaurant so that he could insert a line of his voice-over – live, mind you – into a piece. It’s a lively sequence that highlights the best of what this show can be. Like The West Wing showed us a glimpse behind the scenes of the presidency, The Newsroom at its best shows us the inner workings of a live cable newsroom.

In fact, “working” is the key word there. The best scenes of last season were all moments when these characters put aside their personal lives to react to a fast-breaking news story. The BP oil spill scene from the pilot still slays me. As does the Gabrielle Giffords shooting sequence from the infamous “I’ll Try to Fix You.” Needless to say, I love watching these people work. But I’ve yet to be convinced I should care about the rest of their lives. From the looks of the season two premiere, I’d better get used to it or change the channel.