For the last fifteen years or so, Hollywood has been obsessed with orphans. We’ve seen them survive harrowing shipwrecks (Life of Pi), win game shows (Slumdog Millionaire), and discover old, forgotten filmmakers (Hugo), not to mention the seemingly endless number of them who become superheroes (Batman, Spider-Man, Superman). Why so many orphan movies? It could have something to do with the ever-increasing emphasis on youth culture, or maybe it’s a metaphor for a country struggling to form a new identity in the post-9/11 world. Either way, it is an archetype that has stuck, but few of these films show anything resembling the real-life experience of what happens to children abandoned by their parents.

Short Term 12 does. It explores two sets of relationships: one is between two young adults who work at a housing facility for foster children, and other is between those adults and the children in their care. Grace (Brie Larson) and Mason (John Gallagher, Jr.) are in different stages of accepting their own childhood traumas, which fuels their life-consuming work helping other children in need. They are also in a relationship, and Grace has just found out she is pregnant, which hangs over the first half of the film before exploding as a central issue in the third act.

But the first half, inspired by the director’s own experiences working in a similar “short-term” facility, is better. The opening scenes, in which a new staffer is shown the ropes by Mason, had me worried that I was in for a message movie. We meet children clearly troubled by emotional abuse – outbursts of kicking and screaming are not uncommon – and Mason explains to his new guy (and to us) the unique circumstances that has brought each child there. 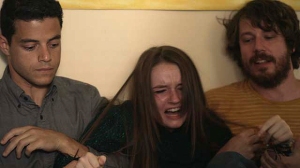 Short Term 12’s raison d’etre is an engaging one: to reveal to audiences a heretofore hidden corner of society. As noted above, we have seen orphans before, but few of their onscreen stories have been told with this level of realism. Still, a story like this one has a tendency to get overwhelmed by its social message, but Crettin gets terrific, humanizing performances out of his child actors and consistently finds humor amidst their suffering. The laughs in Short Term 12 feel well-earned after Crettin puts us through the emotional ringer.

While the humor provides a welcome reprieve from the heavy drama, it may also be symptomatic of the movie’s only real flaw. Crettin seems fiercely committed to showing the good in all of these characters, but he often does so at the expense of the ambiguity, particularly in its troublesome second half.

As Grace gets involved with a new child in her care, a teenage girl named Jaden who is suffering in ways similar to what Grace has experienced, Short Term 12 finds its real story: a fascinating examination of the perils of working through one’s own trauma through the lives of others. Grace and Mason were both foster children themselves, and their experiences have made them sympathetic – and excellent mentors – to the children in their care. But only Mason has actually addressed his own issues stemming from his upbringing; raised in a loving foster family, Mason, as portrayed by the very likeable Gallagher, has turned into a loving, thoughtful, “normal” human being.

Grace, on the other hand, has not properly dealt with her own sorrow. In fact, she is avoiding it by putting all her energy into others, and, as she becomes more involved in Jaden’s future with a potentially abusive father, her own trauma returns and becomes a major threat to her own existence.

All of this seems very realistic to me, and it is deeply admirable for Short Term 12 to raise these complicated issues with such humor and grace. Still, the film’s significant mistake is how it seems to resolve itself a bit too easily, particularly Grace’s issues. She has a short, mostly meaningless scene with a therapist, but it’s a simple act of physical catharsis (she beats up a car with a baseball bat) that seems to do her the most good. I’m not sure issues like hers are resolved that easily; while the moment may have provided a nice emotional climax, it also erases the film’s beautiful complexity.

Maybe Crettin loves his characters a little too much and insists upon giving them a happy ending, but that’s not what his film required. For most of its running time, Short Term 12 is like a bowl of really good health food. It’s satisfying in a deeper way than any pizza or burger because you know your body needs it. And because your body needs it, it tastes good. But just when you’re getting to the bottom of the bowl, someone comes along and throws some whipped cream, hot fudge sauce, and a cherry into it – just to make sure you like it. That’s how Short Term 12 ends. The filmmaker may have thought he was making his movie go down a little smoother, but really he was just trying to turn it into something it’s not.