This is not how Hollywood careers are supposed to go. Everything we know about how the film industry treats women tells us that female actors are not supposed to work in television for 30 years and then get their first starring role in a movie at 52 years old. But that’s exactly what has happened to Julia Louis-Dreyfus, who gives the performance of her career in the sunny and tender Enough Said.

On television – in Seinfeld, The New Adventures of Old Christine, and Veep – Louis-Dreyfus has made her living playing desperate women. Sure, they are beautiful, funny, and charismatic, but they seem always one step behind the game, and it’s her characters’ transparent attempts to be in control of the situation that comprises Louis-Dreyfus’s comedic persona.  Her character in Enough Said – Eva, a middle-aged masseuse who is re-entering the dating world while her daughter is leaving for college – is built from the same parts, but the medium of film allows her to fill in the background of that stock character with rich emotional details and convey a meaningful inner journey. In some ways, it’s the first complete character she has ever put on screen.

In fact, the performances by Louis-Dreyfus and the late James Gandolfini, as her sweet but slovenly love interest, are so strong that you might not notice just how closely the script hems to a standard rom-com template. Eva meets Albert at the same party where she strikes up a friendship with Marianne (Catherine Keener), without knowing that the two were once married. She falls hard for Albert – you are unlikely to see a more real depiction of middle-aged romance on screen – but Marianne’s constant complaints about her ex-husband starts to poison Eva’s perception of him. Meanwhile, Eva struggles to keep each of them in the dark about her relationship with the other.

It’s a plot that could have been the basis of a Seinfeld episode – in fact, it bears a few similarities to “The Van Buren Boys,” in which Jerry is dating a girl that everyone recognizes as a loser except for him – but that’s not the only reason Louis-Dreyfus is so well-cast. Having honed her chops on television comedy, she has a stable full of comic reactions: a furrowed brow, an awkward avoidance of eye contact, and a huge, belly laugh that opens her mouth so big you can see her wisdom teeth. Her facial acting is an unusual fit for the big screen, in which you can convey a lot with a little, but it’s perfect for Eva, who, in awkward social situations, seems desperately unable to hide her inner feelings. It is a cringe-worthy performance, and credit Louis-Dreyfus for having the right tools, but director Nicole Holofcener deserves special mention for the casting. 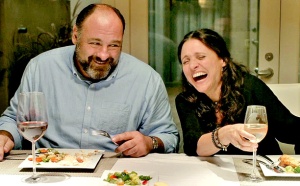 And then there is Gandolfini, who has received much of the attention in recent weeks. To those who only know him as Tony Soprano, his soulful, chubby single father will seem a stark departure. But Gandolfini has always had a sensitive side. Much of what made his tough-guy work so interesting is that he seemed to be at odds with it (look at this clip from True Romance for a prime example). But then there are films like Where the Wild Things Are, in which he voiced a “monster” who bruises at the slightest insult. His performance in Enough Said is not an aberration but just a matter of a film that plays to the late, great actor’s true strengths.

Which is why, ultimately, it’s Holofcener who deserves the credit. Often criticized for only making films about rich, white people (Please Give, Lovely and Amazing), Enough Said is her most relatable work yet. It also breaks most of Hollywood’s rules about what makes a successful film. A movie about middle-aged people finding love? No way. A lead actor with no proven track record at the movies? Never in a million years. Had the studio gotten their mitts on this film, Louis-Dreyfus and Gandolfini would have likely turned into Reese Witherspoon and Seth Rogen. Let’s be glad Holofcener is doing it her way.