At first glance, All Is Lost sounds more like a film school assignment than a successful movie. Can you tell a complete story with one character, just a handful of lines of dialogue, and long, slow stretches with little action – and still keep your audience’s attention? Writer/director J.C. Chandor’s gripping survival tale answers resoundingly in the affirmative. This sparse and meditative work succeeds thanks to a cast and crew who have faith in the simple power of its narrative, as well as a winning solo performance by one of Hollywood’s last great movie stars.

The film opens with a start. An older man named only in the credits as “Our Man” (Robert Redford) is sleeping aboard his sailboat in the Indian Ocean when a wayward Chinese shipping container smashes into his hull. He temporarily patches up the ship, but the water has destroyed his radio, leaving him no choice but to drift towards a shipping route in the hopes of being rescued. He’s not a passive character, merely one on the defensive. Having been left vulnerable by the accident, Our Man engages in a pitched battle against nature, with storms and sharks as his enemies and his own resilience his only weapon.

Still, it’s not quite as thrilling as I’m making it sound. Our Man goes about his business with a grim determination, and much of the film plays out as a how-to guide for surviving on the open sea. Without experience on a sailboat, you might not understand some of what the character is doing, but you’ll get the gist of it: he is trying to survive any way he can and, over the course of the film, failing. He miraculously survives a vicious sea storm, but his boat springs another leak, so he sets out on a lifeboat. He does everything right, but nature seems to have other plans.

Redford is the right actor for the role, though the performance he gives is so minimalist, so devoid of pretense, its greatness is easy to miss. As an actor, Redford has always been a heckuva movie star; he anchored nearly a dozen timeless films in the prime of his career with his easy charm and a twinkle in his eye, but now those eyes seem painfully hollow. The old vitality is gone, and all we can see is the space it once occupied. But in this context, it works because his character is nothing except his actions; his personality is absent without anyone to share it with; and he is defined only by his continuing survival. 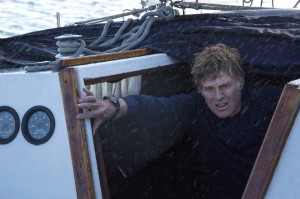 Although All Is Lost stays determinedly in the present and refuses to comment on its action, its slow, methodical storytelling style offers the viewer ample opportunity to reflect on its themes. It acts as a template for us to put ourselves onto – our politics, our hopes, and our fears – and ultimately, the film functions on as many levels as you want it to. Is it a meditation on mortality? A climate change allegory? Or a testament to American ingenuity? All of these seem like reasonable explanations, but neither Chandor nor Redford is telling.

It’s a new approach for films in this genre. Survival tales have a habit of being thrilling and suspenseful (like Gravity) or emotionally manipulative and desperate to entertain (like Cast Away). But All Is Lost is uninterested in our approval. There is no Wilson here, no fun to be had. Even at its most turbulent, it is quiet and graceful. One could even see the film as a lesson in storytelling that Hollywood badly needs right now. After a summer of box office disappointments, each of them packed with long, elaborate action sequences, crumbling cities, and death tolls in the thousands. All Is Lost holds you tightly in its grip for 90 minutes simply by pitting a single character against the natural world.

If there is a flaw, it comes only in the film’s final seconds, when it becomes clear how badly Chandor has backed himself into a corner. As the ending drew closer, I found myself wondering – would any conclusion satisfy? The film’s perspective on man’s plight would not seem to justify a happy ending. On the other hand, what is the point of a story with no hope? Chandor’s solution is not as satisfying as the film that led up to it, but I suspect he is perfectly content to leave us asking the right questions.

My Rating; See it in the Theater