When The Hunger Games was released into theaters in 2012, critics spent as much time debating its politics as they did reviewing the film. Almost everyone felt that the film had a partisan message, but few agreed as to which side it was actually on. Writers from Forbes and Fox News saw the film, with its rejection of centralized power and an intrusive government, as reflecting the politics of the Tea Party. Outlets on the left such as Think Progress and The New Yorker, however, saw an allegory about the dangers of income inequality. Taken as a whole, these varied reactions were indicative of our divided nation. Liberals and conservatives are essentially living in different realities these days, so it should be a surprise to exactly no one that they saw different things in an allegorical film.

But what these critics seemed to miss about The Hunger Games is that it was uninterested in partisanship. On the contrary, its allegory (which is rich enough, of course, to encompass many interpretations) criticizes the very divisiveness that these critics tried to impose on it. As President Snow pits the 24 children against each other, so too does government and the media seek to drive a wedge between Democrats and Republicans, country folk and urban dwellers, and rich and poor. This divisiveness, according the film, is not the natural order of things; it’s a tool inflicted by those in power to keep us all distracted and pacified. Some might argue that the mainstream media serves the same purpose these days, and partisan commentators who tried to claim The Hunger Games as their own were, sadly, part of that destructive process.

With the release of Catching Fire, however, critics are starting to catch on. Most of the recent reviews reject any partisan interpretation of the film, instead painting it as a carefully orchestrated catch-all allegory for our challenging economic times; neither liberal nor conservative, just vaguely populist. The LA Times recently published a comprehensive summary of this argument in its piece, “The Malleable Politics of ‘Hunger Games'”. In Salon, Andrew O’Hehir noted that the film “allow[s] Tea Party libertarians to embrace Katniss Everdeen’s incipient rebellion against the tyranny of the effete, aestheticized and affluent Capital as easily as could Obama liberals or left-wing anarchists.” Jason Bailey at Flavorwire pushed the argument further, suggesting that the film’s political flexibility was the reason for its success: “The Hunger Games is ‘political’ without actually having to stand for anything.”

O’Hehir and Bailey are two of my favorite film writers working today because they consistently strive to put films in social contexts. I agree with them here – to a point. The central allegory of The Hunger Games movies is so apt that it certainly can function as a catchall political allegory. It skewers our society’s celebrity culture, militarism, and infatuation with youth, not to mention the income inequality that drives the film’s plot. And I agree that one can find both conservative and progressive elements in the film. Treating income inequality as an issue of basic fairness, as the film does, is undeniably progressive and utopian, but using President Snow (Donald Sutherland) as a sinister despot (implying that the villain is centralized power, not a failed or corrupt system) comes off as an argument against big government. 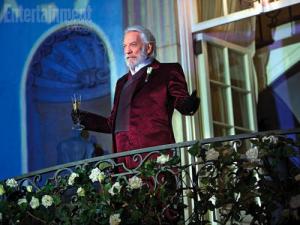 But this post-partisanship is not a flaw; it’s a fact. I sense in arguments like theirs a certain disdain for the film’s lack of partisanship, as if the filmmakers are cowardly for trying to appeal to both Occupiers and Tea Partiers. But ultimately, these groups are each responding to the same problems in our society as Catching Fire. Congress’s approval rating currently sits at 9 percent, the lowest in recorded history; Obama’s disapproval rating floats above 60 percent. What does this mean? That the problems in our government, as perceived by the people, run far deeper than just hating the guy on the other side of the aisle.

For example, militarism – the rejection of which is one of the film’s central themes – is an issue that knows no partisan bounds. Republicans may have launched the last two major wars, but they did so with solid Democratic support. When the Obama administration proposed a military strike on Syria earlier this year, everyone from staunch progressives (Dennis Kucinich) to libertarians (Sen. Rand Paul, who is the closest thing the Senate has to one) opposed it.

The other problems that the film identifies – centralized power, income inequality, and celebrity culture – are also no longer partisan issues. We used to think of criticisms of centralized power as a Republican issue, or at least an issue that is only taken up by the party not represented in the White House. But when discussing Obama’s use of drones and his now-infamous “kill list,” critical voices on the left are as loud as those on the right.

Income inequality? That’s really a bipartisan issue, too. Although it was one of the central complaints of the Occupy Wall Street movement (I think), the Tea Party has railed just as loudly against elitism, which is really just income inequality by another name. Further, both movements sprung from the same poor economic conditions, and many of the policies that led to our income inequality (for example: poor health care, corporate tax breaks, and welfare reform) were enacted by both parties.

Lastly, our culture of celebrity has no partisan leanings. Hollywood is a mostly Democratic institution, but the film depicts that celebrity culture as an equal-opportunity oppressor. In fact, the central insight of The Hunger Games franchise – that celebrity is death, that to hold someone up is also a way of holding everyone down – is far too eternal to be relegated to a single political party.

In other words, the problems that The Hunger Games so astutely identifies should have no partisan context. They were caused by a broken political system that both Democrats and Republicans have taken advantage of. To avoid placing the struggle the films depict in a partisan context is not an act of cowardice or greed; it’s an act of bravery, a shot fired across the bow in the fight to create a post-partisan world, an act of truth that is all too rare in our society that seems designed to distract us from it.