Believe it or not, most Hollywood movies are conservative. I mean conservative in the traditional sense, not in the sense of today’s mainstream Republicans, who helped us rack up a crippling deficit by launching pre-emptive wars. Those aren’t conservative values. Conservatism, in a cultural sense, is about preserving the status quo or making incremental social improvements, instead of pushing society’s boundaries in efforts to redefine ourselves. Why do most mainstream movies fit this definition of conservatism? Because their plots – especially their endings – traditionally reinforce the structures that have already defined our society for centuries: marriage, family, or victory of some kind. The movie can’t end until the hero gets the girl, makes off with the money, or wins some kind of pivotal battle, physical or otherwise. These values have been the hallmarks of our particular brand of capitalism, and Hollywood – despite protestation from the right of a “liberal Hollywood elite” – makes it money reinforcing the status quo, not challenging it. Despite a wealth of dark, gritty independent cinema, most Americans still go to the movies to feel good.

But in this hyper-political decade, the movies have begun to reflect a more specific conservatism. The films represented below reflect the conservative positions of our day – anti-immigration, anti-environment, and opposing the ACA – and show that, despite all the progress that other movies of 2013 have shown, film will always be a safe place to be conservative.

It’s a Tea Party immigration revenge fantasy with a twist: the Arizona border sheriff (played, without irony, by Arnold Schwarzenegger) is trying to stop a hardened Latino criminal who has escaped from jail from getting back into Mexico. A few chuckles not withstanding, The Last Stand is an homage to the conservative action movies of the 1980s that promote individualism by depicting the ineptitude of the federal government to police our society. The final scene – a fistfight that occurs literally on the border – will be cathartic for lots of anti-immigration activists.

The partisan lines on militarism are always being redrawn, but I still associate hawkishness with the Republican party, which makes Lone Survivor a perfect choice to screen at the annual GOP Congressional retreat. It is no surprise that the film, directed by Peter Berg (who last year berated an Israeli journalist for having avoided military service) reveres the military, but the key moment in Lone Survivor comes when our heroes stumble upon three Afghan civilians, including a two children, a hundred yards away from a village filled with Taliban soldiers. The safest tactical move would be to kill them, but one of them (Mark Wahlberg) reminds his men that, if they do, their actions will end up on CNN and reflect poorly on their unit. All the bloodshed that follows is a response to this act of compassion, which, the film tells us, no place in warfare. The message is reminiscent of the revisionist Vietnam movies of the ‘80s – like First Blood – that imply that all of these wars are winnable, if the dumb civilians back home would just get out of the way.

I’m guessing that writer/star Brit Marling actually conceived The East as a pro-environment movie, but her deference to sensationalism over the facts damned its chances of doing any good. Marling plays a corporate spy who goes undercover in an eco-anarchist group (opponents would call them “eco-terrorists”) and is quickly won over to their side. Marling’s failures are numerous: First of all, the film inaccurately depicts eco-anarchists as willing to hurt other people, when in fact not a single person has been killed by these types of activists. More importantly, however, the leader of the group (played by Alexander Sasrgaard) turns out to be a selfish little jerk who cares more about covering his own ass than protecting the environment. Whether Marling actually intended to make a conservative film or not, The East would have been beloved by the pro-business, anti-environment bloc, if any of them had actually seen it.

And if you don’t believe me, listen to how Glenn Beck latches onto this false depiction of anti-corporate activism:

Dallas Buyers Club has rightly been called out for its antiquated depiction of a white straight male’s struggle with AIDS, but its conservatism runs deeper than that. The real villain in the film, which tells the true story of the late Ron Woodroof, is not the virus itself or even Woodroof’s homophobic friends who ostracize him after his diagnosis. No, it’s the FDA which is peddling a destructive therapy to AIDS patients while blocking Woodroof’s attempts to import better, unlicensed drugs from Mexico. This negative depiction of the federal government’s intrusion into America’s health should have found a large audience among Tea Party Republicans who have spent the better part of the last five years lamenting the Affordable Care Act and the individual mandate.

And the #1 most conservative movie of the year is…

One thing that has always set Superman apart – from the early comics right up to the present – is that he is not one of us. Original creators Jerry Siegel and Joe Shuster, the children of immigrants themselves, channeled their feelings of Otherness into a character who came from a distant planet and struggled to be accepted.

But this newest iteration of the most American superhero takes a hard-right turn in creating something of an anti-immigration fantasy. Director Zack Snyder and his writers brought back General Zod, a famous villain from Superman’s home planet of Krypton, to threaten Superman’s existence, but, very quickly, the U.S. government gets involved, too. The military doesn’t trust Superman because he is of the same race as General Zod and his henchman – and also because they fear his Otherness – but they finally learn to accept him when they witness him do battle with Zod on a small town street in America’s heartland. After watching Superman save a military servicemember from certain death, the military general finally agrees that “[t]his man is not our enemy.” 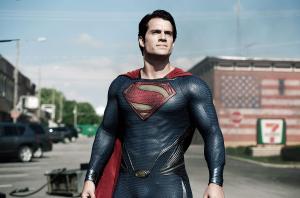 The perspective on immigration championed by Man of Steel is anathema to the Melting Pot theory of immigration and assimilation. It says that an immigrant should only be accepted once he proves his loyalty to America. And how must he do this? By destroying his own culture. The film sets up a false choice – that you are either American or alien – and asks us to cheer as Superman fights to protect his new home and destroys the last remnants of his old one in the process.