Whiskey Tango Foxtrot, Tina Fey’s new war-journalism rom-com, is getting hit from all sides. In addition to its paltry box-office performance, accusations of whitewashing have rightly dogged the filmmakers, who cast American actor Christopher Abbott and British actor Alfred Molina as Afghan characters. Fey herself is taking the brunt of the blame, epitomized by Buzzfeed’s takedown entitled, “It’s Time to Stop Apologizing for Tina Fey. It’s easy to see why both her fans and journalists are ticked off. To those progressives who held her up as a political hero for her vicious impression of Sarah Palin and her myriad on-the-record statements in support of feminist causes, a misstep like this feels more like a betrayal.

But we shouldn’t miss the forest for the trees – or the desert for the sand. Whitewashing concerns aside, Whiskey Tango Foxtrot deserves to have its feminist victories celebrated, as it takes a particularly thoughtful approach to women’s issues.

At first glance, it appears to follow the well-worn path of most other contemporary feminist blockbusters by placing women in genres typically reserved for men.. From Bridesmaids and Trainwreck (raunchy comedy) to The Hunger Games and the Divergent series (action flick), Hollywood has in recent years seemed intent on proving that, when it comes to earning commercial and critical acclaim, anything men can do women can do better.

Of course, there is no genre of film more exclusive to men than the war story, and with reason. It was just last year that the Department of Defense finally decided to allow women into combat roles, and recruitment only began last week, according to reports.  But Hollywood has found a way to get there first. Whiskey Tango Foxtrot tells the semi-true story of Kim Baker, a journalist desk jockey who takes an assignment in Afghanistan and finds self-actualization by shooting guns, running from whizzing bullets, and engaging in frat house antics with her fellow embeds. 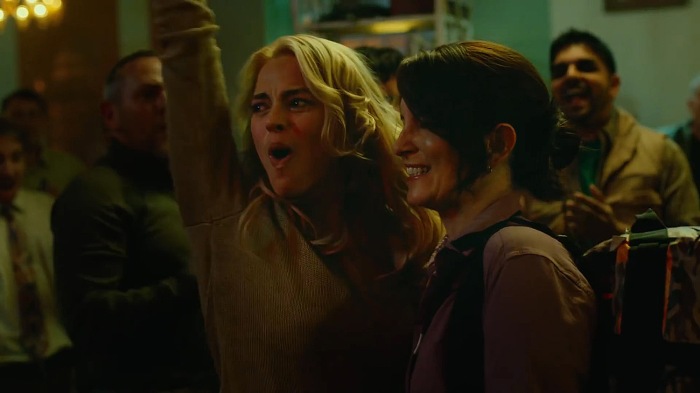 And yet Whiskey’s version of feminism is more complicated than that. The film ultimately subverts the idea that feminist goals can only be achieved through the masculinization of women, although it takes its sweet time setting that subversion up. From the moment that Baker (Fey) arrives in Afghanistan, she is routinely and consistently forced to acquiesce to the male gaze. She seems barely insulted when a female coworker (Margot Robbie) tells her that she’s considered a “9.5” in Kabul, even though she’s just a “6” in New York, or when a general (Billy Bob Thornton) warns her not to have sex with his men. Virtually every guy she meets there has the same thing on his mind: her buff security guard prances shirtless in her presence, and even the powerful Afghan government official (Alfred Molina) with whom she nabs an interview develops an immediate crush and tries to use his power to coerce her into sex.

Yes, it’s a male-dominated world, and Baker, desperate for any type of change from her boring life in New York, is thrilled by her immersion in it. In one notable scene meant to symbolize Baker’s conversion, she gets her kicks firing a machine gun. The camera luxuriates in the gleeful look on her face as she feels the thrill of the hot weapon, discharging round after round into the air. The symbolism is not subtle, and it echoes a nearly identical scene in David O. Russell’s Joy, which is about a young woman trying to compete in the male world of business. The phallic overtones – virtually a new cliche of female-driven commercial cinema – represent the only kind of feminism Hollywood can understand, one in which women succeed by beating men at their own game, instead of creating their own set of rules.

While it’s good for young women to see such strong female characters, it also reinforces the strength of the male gaze. Mercifully, Whiskey Tango Foxtrot seems to understand this, and in its final third, it rejects the male-driven view of feminism for something truly independent. In the film’s climax, Baker’s boyfriend gets kidnapped by warlords, and when she convinces the Marines to go after him with her cameraman in tow, we’re not sure if she’s doing it for her career (good feminism) or to rescue the handsome bloke who promises to take her away from it all (bad feminism). We get our answer the next day, when, after a welcome home romp in the sack, she informs Ian she’s moving back to the U.S. to advance her career, and, hey, he’s welcome to join her if he wants. When asked why she’s leaving, she explains that she started to feel like her lifestyle in Kabul was normal. Explicitly referring to her burgeoning addiction to the thrill of war reporting, her words could also be read as a reference to her resistance to the dominant maleness of her world, and the energy it took to live up to those standards.

It’s a meaningful bait-and-switch. One respected female critic called this section a “drag,” noting that she came “to watch Tina Fey kick butt.” But the film suggests that ass-kicking is only a minor feminist achievement, and not one that we, or Hollywood, should linger on too long. Earlier in the film, Baker self-actualizes by being a war journalist/action hero, and maybe that was a necessary part of her journey, just like, for society at large, the stories of characters like Katniss Everdeen and Black Widow  might be an important step on the way to gender equality.

But it shouldn’t be the new normal for a society to demand that women act like men, and it certainly doesn’t seem like part of any long-term feminist goal.. Through the journey of its protagonist, Whiskey Tango Foxtrot recognizes this and, in an act of narrative heroism as brave as can be found in any war story, blazes a new trail forward.