Edward Snowden is director Oliver Stone’s kind of hero: a zealous patriot who becomes disillusioned about his beloved country, publicly criticizes it, is labeled a traitor, and eventually learns a more complex definition of what it means to be patriotic. Stone has been down this road before – with the young Vietnam-era soldiers of Platoon and Born on the Fourth of July, the idealistic lawyer prosecuting a national conspiracy in JFK, and even the innocent capitalist in Wall Street. On television, he recently produced a mini-series called Oliver Stone’s Untold History of the United States, but the title was redundant. His entire career has been been a subversive, left-wing retelling of the iconic political events of his lifetime.

The problem is that the story of Edward Snowden is hardly untold. Stone’s hagiography doesn’t arrive at any point that wasn’t depicted with more tension and efficiency in Laura Poitras’s 2014 documentary Citizenfour. Even less helpfully, Snowden opens on a fictionalized version of those same scenes we saw in Poitras’s film: Snowden (Joseph Gordon-Levitt) sitting in a Hong Kong hotel room, strategizing with Poitras (Melissa Leo) and journalist Glenn Greenwald (Zachary Quinto) about how best to get Snowden’s information to the world. It’s a colossal mistake. The scene demands a comparison with Citizenfour that isn’t tilted in Stone’s favor.

From there, we jump backward to Snowden’s brief time in the army. His slight frame can’t handle the workload, and he shatters a leg.  His doctor tells him, “There are a lot of other ways to serve your country,” Snowden joins the CIA, and then the NSA, impressing his bosses enough to get high-level clearances, where he eventually learns the scary truth about the extent of the surveillance state.

The film certainly provides a cursory education to people who have not been paying attention to this story – or, like too many of us, have simply moved on – but its revelations don’t really land because the film doesn’t dramatize their impact. It’s hard to do so, after all, when sticking to the facts. Off-screen, the public has largely moved on from the discussion of privacy (you’ll notice how rarely it has come up in our presidential election) because the negative impacts of it require a leap in imagination that our public policy debates can’t really hold. When Snowden tells his girlfriend about the expansive use of surveillance, she replies, “So what?” The film never quite gives us the answer the public is waiting for.

The dramatic stakes are then confined to the life and career of its central character. On paper, Snowden is a relatable guy, a young idealistic man who sacrifices much for his love of country. But too often, Joseph Gordon-Levitt resorts to mimicry. He nails the voice, and the hair and make-up team do top-notch work transforming Gordon-Levitt’s all-American look into something closer to Snowden’s mousiness. But the transformation is only skin-deep, and the actor never uncovers anything beyond Snowden’s steely exterior. 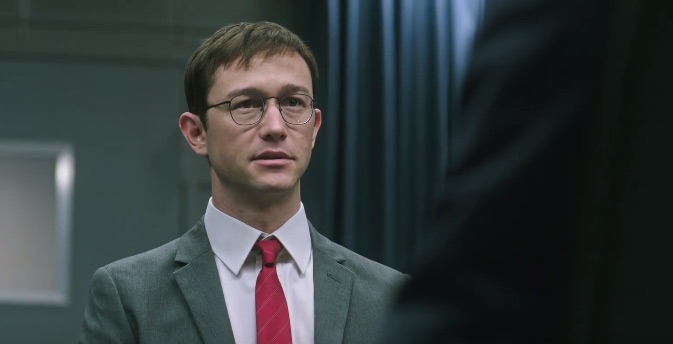 Of course, there is no evidence that Stone was looking for it. In real life, Snowden comes off as robotic in interviews – his character even jokes about it in the script here – which is not an ideal quality for a protagonist in a film intended to move hearts and minds. Understanding this, Stone works hard to humanize him. He spends long stretches of the film on his relationship with his warm, supportive girlfriend (Shailene Woodley), and stops for a subplot about his late-onset epilepsy. These threads are designed to humanize a character who can come off as wooden, but they can’t mitigate the core issue: Through no fault of his own, Snowden has a personality that makes him hard to root for.

It’s ironic. The film is undone because its central character – who Stone is celebrating for bringing transparency to American surveillance practices – can’t be transparent about himself. We know he’s a stand-up guy who is driven by a strong inner morality. We know that he loves his girlfriend. Beyond that, Snowden is a mystery, and Snowden suffers for it. Like in most of Stone’s worst movies, the real protagonist is the director himself, who has woven together the threads of a real-life intrigue to fit his own personal obsessions. To be fair, that’s what many great directors do. To be clear, they also make better films than this one.

One thought on “More Intelligence Needed in “Snowden””