A Quiet Passion is a chilly, detached affair, just as Emily Dickinson would have preferred it. The first biopic of Dickinson, one of the greatest American artists, is not particularly interested in her playfully haunting poetry. We get snippets of it here and there, but this isn’t one of those biopics in which the subject’s wretched personal life is redeemed by artistic success. Dickinson was only redeemed in death, an intense form of suffering that Cynthia Nixon (Sex and the City) evokes with emotional specificity. Tortured by her feelings, her face remains composed in the guise of immortality, but her eyes burn with earthly suffering. It’s a masterful performance in a masterful film.

Terence Davies, who both directed and wrote the script, has found in Dickinson a perfect vehicle for his own creative affinities; chief among them is his struggle with death. In The Deep Blue Sea and last year’s magnificent Sunset Song, he demonstrated with raw emotion the impact of war. A Quiet Passion touches on this subject, as well. Dickinson’s brother wishes to fight in the Civil War, but his father forbids it. Nonetheless, Davies stops the action to visit the most blood-soaked battlefields, complete with onscreen text informing the viewer of how many lost their lives there.

To some, this might feel like an unnecessary sidebar. After all, what does the Battle of Gettysburg have to do with Emily Dickinson’s suffering? In truth, everything. The film paints Dickinson as an acutely sensitive person who feels beset on all sides by evidence of her mortality. As a teenager, she leaves Mount Holyoke Seminary and College having neither embraced nor rejected its fire-and-brimstone teachings. Still, the spectre of death is present in her life. After visiting with an elderly relative, she bids her adieu while holding back tears, despite no evidence of her impending doom.

After one of the most arresting and unique passage-of-time sequences in recent films, Dickinson emerges as an adult, now fearful of a different kind of loss. She makes friends with Vryling Buffam (Catherine Bailey), a local bachelorette who has dedicated herself to the art of repartee. In every exchange, she is ready with a barb or quip, which makes the first half of A Quiet Passion, in which she dominates the frame, delightful in its clever dialogue. Buffam, Emily, and Emily’s sister Vinnie (Jennifer Ehle) revel in their relative youth, gossiping together and speculating about their future husbands.

Of course Dickinson is destined not to have one. When Buffam finally marries, it’s a chilling moment for Dickinson, who sees any loss as a metaphor for the larger one awaiting us all. When her parents become ill and die, she isolates herself for good. She hides herself in her room, speaking to visitors who must shout to be heard from the bottom of her stairs. Her affinity for a clever turn-of-phrase, so evident in her poetry, is expressed in bitter judgment and envy of her peers and family members. In a sense, A Quiet Passion is a deconstruction of the Victorian romance drama that trades on quick wit and flirtatious dialogue. The film demonstrates that a mastery of language can bring about small pleasures, but it cannot redeem life’s loneliness.

Dickinson may see herself as a victim, but Davies refuses to depict her that way. She lashes out in cruelty at those who don’t meet her ethical standards, and, in these moments, it is difficult to enjoy her company. Then we see how deeply slighted she feels at the slightest bit of indifference, how her sense of pride both keeps her upright and pushes away those who could could truly support her. This complex characterization would be impossible without an actress of Nixon’s emotional courage. Most actors prefer to be likable, or they play characters who are so cartoonishly unlikeable that we live vicariously through them as if in a fantasy. Both are attractive propositions.

As opposed to the fawning portrayals that many biopics rely on, Nixon gives a richly textured and human performance. She shows every shade in Dickinson’s palette, her screaming reds and her cool, distant blues. In doing so, she creates real sympathy and understanding. It’s a moving tribute to an artist who steadfastly refused to ignore life’s unbearable realities, and her letter to the world that, although it eventually loved her back, took far too long to do so. 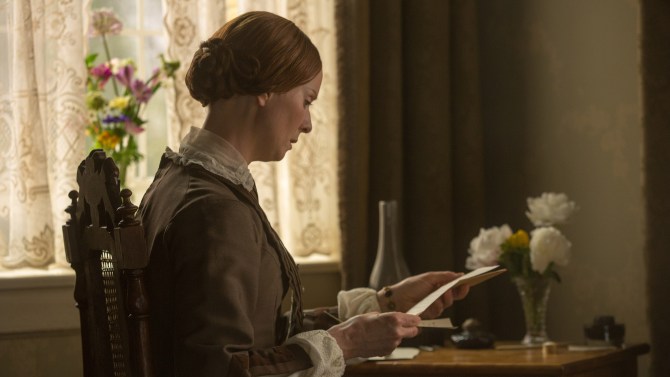