I was really beginning to worry. Tonight’s episode – the conclusion of the two-part “Blackout” episode – started out exhibiting the same problems evident last week. It was far more about the characters – none of whom I have really grown to like that much – than the issues. The Brian Brenner reporter character was brought in to raise the stakes of Will and Mac’s non-relationship; Sorkin is looking to heighten the tension but instead is just spinning his wheels. Until Will and Mac fall back into each other’s arms, there is no real drama here. Just two people who we are told were once in love sniping at each other. And Brian is given precious little to do in these two episodes – until his ninth-inning speech to MacKenzie. More on this in a moment. 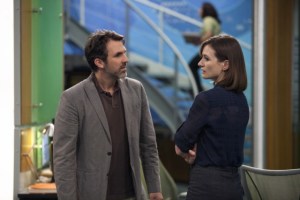 While Will and MacKenzie work out their issues, the entire news team is sick of covering Casey Anthony and Anthony Weiner (for the sake of brevity, we’ll just call it the Casey Anthony Weiner story), but they continue do so in the hopes that they will get the GOP primary debate that they covet. This is sound logic and a natural place for Sorkin to take the show. Everyone who watched the GOP primary debates this election season recognized what a failure they have become. Changing the debate format makes sense as a way to begin to chip away at a corrupt political system.

Since the entirety of the two-part episode was a build up to the mock debate staged for the RNC reps, the episode must be considered a failure. Despite the audacious claims to change the system and have a debate in which “there are no rules,” there was precious little new about the News Night debate format – except that it had a tough guy like Will McAvoy doing the moderating.

As Will has stated several times in the last two weeks, the only reason they were covering Casey Anthony Weiner at all was to boost the ratings to get the debate. And given that he spent the entire mock debate showing the GOP candidates to generally be the idiots that they are, how in the world did he think that the RNC reps would go for it? Of course, this is just the kind of quixotic quest that Will has become known for the in past nine weeks, but it strains credulity to think that Will, Mac, and Charlie would have cheapened the brand of their hard-hitting news show for a debate format that would clearly never see the light of day. If they had actually come up with a debate format that was new and interesting, maybe this would have worked. But it seems that Sorkin’s creative tank was empty here.

But when Sorkin fails, he always find a way to soften the blow, usually by recognizing his failures and having a character on the show point them out. This makes those failures look like they were all part of the plan. Here, Brian Benner points out to MacKenzie just how unlikely it was that the RNC would allow this kind of debate to occur, but, although we may initially agree with him , we quickly find that we are not meant to sympathize with his perspective that Will is acting out of “hubris.” Instead, we see that Brian’s outrage is really just masking  his lingering feelings for MacKenzie. This is a shame because it undercuts the merits of his criticism. Essentially, Will has cheapened his show for nothing, but at least he knows how to make lemons out of lemonade. Will dumps the Casey Anthony story and leads with the debt ceiling showdown, a move that gives him the look and feel of a noble man going down with the ship. He knows he will lose his viewers again, and Leona will be in a strong position to fire him. The only thing that can save him now is the NSA whistleblower. I suppose we’ll be hearing more about this next week.

So I find myself describing a disjointed episode that reiterates themes that we have already seen played out. And yet I enjoyed the hour I spent watching “The Newsroom” tonight. Despite his transparent ploys to cover up the flaws in his scripts, Sorkin still has a bit of magic in him. “The Newsroom” has many flaws, but by the time he puts together his standard end-of-episode musical montage, I find myself caring about what I have just watched without really being sure why. Maybe it’s because he makes me laugh. Despite knowing that Will’s business with his pants was just a set-up for a joke later on, I still laughed at the timing of Will bursting out of his office with his pants around his ankles.

Sorkin still has one more episode to pull together the season in a satisfactory way. If he doesn’t, “The Newsroom” may end its first seasons classified as something like a guilty pleasure – the only shame is that it could be so much more.