Considering how deeply “Seven Psychopaths” embraces its meta-ness, it only makes sense to begin this review by comparing it to other movies. Of course, it follows a trend begun by “Pulp Fiction” of violent, funny movies that comment on their own bloodshed. Specifically, it addresses the cyclical nature of violence and consequences – much like “Looper,” which toys with the same ideas but has less of a sense of irony. “Psychopaths,” however, goes even further than self-reflection; it inserts its director and screenwriter directly into the story as the protagonist so it appears that the film is literally writing itself, similar to “Adaptation.” It uses its self-referential elements not merely to comment on the nature of violence – but also to dramatize the process of a screenwriter grappling with the ethics of making a violent film.

Writer/director Martin McDonagh’s cinematic surrogate is Marty (Colin Farrell), a screenwriter struggling with his latest project. He is trying to write a film about killers and psychopaths but wants it to be life-affirming and about “love and peace.” A noble but daunting challenge. His script and life merge, however, when his friend Billy Bickel (Sam Rockwell), accidentally brings a psychopath to him. Billy and his partner Hans (Christopher Walken) steal dogs for a living, returning them to the owners and collecting rewards. But one day, they steal from the wrong guy – a local gangster, Charlie, (Woody Harrelson), who loves his dog more than life itself – and he comes looking for them to reclaim his dog and probably kill everyone. Like many characters in the film, Charlie kills for love.

With its plot twists, stories within stories, and postmodernist bent, “Seven Psychopaths” could never succeed without a game and able cast. Most of the cast seems carefully chosen for their subtle comic abilities, but make no mistake, this is Rockwell’s film. A movie star for the age of irony, he can charm and repulse the audience simultaneously, with an uncanny ability to let the audience in on the joke. He has given many great performances in his career, but no other film has been this good a fit for his particular set of talents. As for Walken, we expect to see him in violent and weirdly funny movies like this one, but what we do not anticipate is that he will provide the movie’s heart and sensitivity. His Hans is a sweet and weary senior citizen who has seen enough violence for one lifetime. 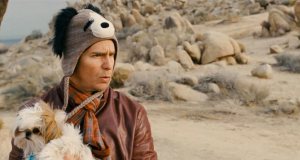 Farrell’s performance is less showy than those of his co-stars but is just as crucial to the film’s success. As a surrogate for both the screenwriter and the audience, he grounds the story – a major accomplishment, especially as the film digs itself deeper and deeper into its postmodernist hole. As the gangster’s net begins to close on Martin, Billy, and Hans – just when a generic movie of this type would resort to action sequences and shoot-outs – our three heroes take a trip to the desert, where they try to finish Martin’s script together. They engage in an hilariously surrealistic debate on the merits of movie violence, while they their own blood-filled comeuppance stalks them across the desert.

In the wake of the Colorado shooting this summer, I have spent a lot of time thinking about the ethics of movie violence (I wrote about it here and here). Movies like “Looper” and “Seven Psychopaths” seem to be grappling with the same questions, but their motives are unclear. “Psychopaths” is in love with its violent imagery, and characters are killed off in every manner imaginable – beheadings, sliced throats, people burned alive and doused in acid. But because the movie is about itself, these killings have little emotional impact on the audience. In a way, McDonagh has given himself license to do whatever he wants – with the excuse that the violence is a comment on itself, not a means of titillation for the audience. But is this legitimate? Are we entering an age in which violent movies must be concerned with their impact on the audience? Is this the last gasp of hyper-violence in film – in which the audience won’t accept bloodshed unless it acknowledges its harm to society? Or is this self-awareness just a framing device, a byproduct of our age of irony, and just a new way to sanitize the violence while still fulfill the audience’s most basic desires?

It is too soon to answer these questions, but it’s rare that a movie gives us so much to think about while also being laugh-out-loud funny. Still, I know that some audience members will revel in the film’s bloodshed. This is unavoidable and on some level intended – it is clear that McDonagh, too, loves the aesthetic capabilities of splattered blood. But it is equally clear that this violence, specifically because it is stylized and unrealistic, serves the director’s greater purpose, which is certainly more than titillation. Does “Seven Psychopaths” exploit the very violence it decries? You bet. But maybe that is the best we can do right now.