There is a scene early on in Django Unchained in which bounty hunter King Schultz (Christoph Waltz) offers a deal to Django (Jamie Foxx), a slave whom he has just bought. Schlutz, a foreigner, is opposed to slavery, but he needs Django to help him track and kill three men for whom a large bounty has been offered. So Schultz reluctantly maintains ownership of his slave but offers to free him after they have finished their work. With this film, writer/director Quentin Tarantino offers audiences a similar deal. He is going to kill a whole bunch of people in increasingly gruesome and often gratuitous ways, but he will offer us freedom from the moral complexity of murder for revenge by ensuring that those who died really, really deserve it.

Django Unchained suffers from poor timing, with the ills of movie violence on everyone’s mind since the Newtown shooting – and the deal that Tarantino offers in Django and 2009’s Inglourious Basterds, which had a similar plot but substituted Nazis for slave-owners, is indicative of our growing concern with violence on screen. The deal has certain trade-offs, and so does the film. It is impossible not to be swayed by Tarantino’s great skill as a director, but there is a moral underbelly to the story that he avoids, and it gnawed at me, even as I was enjoying the mayhem.

Tarantino builds the tension, as the film is split up into two distinct parts. The first half has Schultz freeing Django and teaching him the business of bounty hunting; they quickly find and kill the brothers they’re seeking. Django takes two of them down himself, and the great relish with which he dispatches them brings to mind the Bear Jew’s brutal clubbing of a Nazi officer in the first half of Basterds. It is revenge pornography, and it’s effective in a rather limited way. The violence, which seems to exist for as much for Tarantino’s enjoyment as our own, always feels like artifice, and the contemporary pop music he lays over it may add to the spectacle, but it further removes us from the moment.

The movie picks up significantly when Schultz decides to help Django rescue his wife from Calvin Candie (Leonardo DiCaprio), a wealthy, pretty-boy slaveowner. Tarantino is always better at writing villains than heroes, and Candie is predictably the most vivid character in the film. He is brash and charismatic; his greatest thrill is watching his slaves fight each other to the death (a practice known as mandingo fighting that may or may not have actually existed), but he keeps his own brutality just beneath the surface. When he erupts, it is terrifying in a way that is all the more surprising because it comes from an actor who always plays the hero.

This would all be pretty enthralling if it didn’t seem so familiar. Far too often, Django calls to mind Inglourious Basterds. Much like the Basterds, Schultz and Django are on a secret mission deep in enemy territory. Even though Waltz played the villain in one and the hero in the other, both characters seem similar, using their flair for language as their first weapon, relying on violence only when their powers of persuasion fail.

As a result of these similarities, a feeling of laziness pervades the film. In fact, it is easy to imagine Tarantino riffing on this revenge plot in various genres for the rest of his career. They would all be films worth watching, but for a director of Tarantino’s talent, originality is expected.

Whatever faults one can find with Tarantino as a storyteller, he continues to get the most from his actors. Although Waltz and DiCaprio get the flashiest roles, Jamie Foxx gives the most crucial performance. His character, posing as an expert in mandingo fighting, must maintain his composure as he sees other slaves – including his wife – beaten and humiliated. The tension of each scene goes directly through his character, and in a restrained performance, Foxx performs brilliantly. 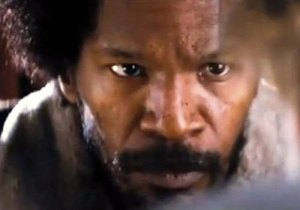 Of course, his Django does not become completely unchained until the big shoot-out that surely earns a place on the list of bloodiest scenes ever in a Western. Whatever restraint Tarantino has shown with his use of violence up until this point is released in glorious climax. Blood is spilled by the gallon, and dozens die. Watching the scene, one can feel Tarantino burning at his brightest, as if he is finally letting himself have some fun after the rigorous and often needlessly complex set-up. Murder is what Tarantino was made for, and all that led to it was merely prologue. For audiences in America, I suspect that will be enough.

4 thoughts on “Justice is Simple in “Django Unchained””