This is a guest post from Reel Change reader Michael E. Douroux.

Have decades of finger pointing and complaining altered in any way how the entertainment industry, centered in Hollywood, is cultivating and marketing — particularly to our young — gratuitous, graphic violence as a socially acceptable form of mainstream entertainment?

I spent 25 years as a literary agent representing writers, directors, producers and cinematographers in motion pictures and network prime-time television.

What moves Hollywood is not complicated.

It’s time to remove ideological barriers which have the people’s business stuck in no man’s land — in favor of special interests — and actually get something done.

For those who are proponents of redistributed wealth for the betterment of society, how about a different type of VAT, or Violence-Added Tax, on both the purveyors and consumers of violent media to help fund the mental health care system?

We put heavy tax on tobacco to discourage use; we can do the same for gratuitous violence.

Just this past November in Cook County, Ill — the county that includes Chicago — the Board of Commissioners passed a “violence tax” on gun sales to defray uninsured hospital costs.

If the costs to society from obesity, diabetes, etc., is the premise of those who want to regulate what is fed to bodies, the social costs of mind-feeding hi-octane violence — again, particularly to our young who are the most vulnerable — is on the table.

And let’s cut through the stall tactic of pitting one scientific study against another with a simple question: Would advertisers pour billions into popular media if it had no impact on behavior?

The Nelsons were not up against today’s technology.

How can a smart device check I.D.?  MPAA and ESRB ratings have become nothing more than false PR fronts.

It is glaringly obvious that parents — despite all best efforts — are now at a built-in disadvantage as far as controlling what their children are exposed to way before they are ready to handle it. The violence peddlers know this — more importantly, they count on it to drive sales!

Is the village going to continue to look the other way or step in and give a helping hand?

We get how in the name of “art” it is part of the free market of ideas to both cultivate and appeal to prurient interests as the path of least resistance to big box office.

However, as far as owning the personal responsibility that goes with it, it’s interesting to watch how Hollywood’s elite are now desperately trying to twist, turn and distract their way out of the hypocritical trap they have placed themselves in.

It really does take a trained actor to stand before a camera with a straight face and plead for controlling gun violence while down the street at the local cineplex they’re on the big silver screen blasting away.

Any national debate over violence in America that does not join at the hip Hollywood’s cash cow of glorified, romanticized human slaughter will be just another slick political exercise in hypocritical nothingness. 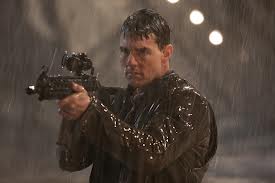 The weekend after the Dec. 14 shootings in Newtown, Conn. — which left 26 people dead, including 20 children — Obama aide David Axelrod tweeted, “In NFL post-game: an ad for shoot ’em up video game. All for curbing weapons of war. But shouldn’t we also quit marketing murder as a game?”

When it comes to selling murder as a game, human beings are fair game?  Imagine, if the target of on-screen violence were animals, would it be tolerated?

First, headlines from the mainstream media have narrowly framed the national debate under the banner of ‘Gun Control.’  Common sense calls for effective gun regulations that will actually reduce violent crime.  But other major components of what we are facing such as mental health care, preventive law enforcement and the pervasive culture of media violence are equally important and deserve top-line billing.

To be more accurate and comprehensive in approach, reframing the debate under the banner of ‘Violence in America’ would better serve everyone.  However, make no mistake about it, to do so would open a Pandora’s box that Hollywood wants kept sealed at all costs.

Taking on political and social opponents is expected, but are the institutional players really capable of acting independently by standing up and confronting the power of the media’s crown jewel, Hollywood; or, will they lockstep — and by omission — do its bidding?  According to the unwritten rules, the latter.  And let’s draw a circle around the fact that major stakes in Hollywood are held on both the left and right sides of the political/social spectrum.

Second, up to this point, all appeals for some decency and self-restraint on the part of the violence peddlers have been gunned down by naked greed.  So, if greed is the clear driver of a problem that is poisoning our culture every second of every day, let’s get real about a solution that deals directly with greed on its own terms.

Check out the Los Angeles Times article from 1999 entitled “Violence Tax Can Stem the Killing” by Peter Navarro.