This is a guest post written by Evelyn Hunt.

With the topic of gender equality, abortion, and women’s rights in the opinion and feature headlines of nearly every American publication as of late, it’s nearly impossible to ignore the fact that contemporary Americans seem to want to talk about feminism and what it means for us as a nation. In the wake of Roe v. Wade’s 40th anniversary on January 22nd, the actual act of abortion, how the ruling has affected women, and even how the ruling combined with the procedure has affected the country at large have all been commented on at length by prominent politicians, journalists, and writers alike. With so much being discussed in the open media, it seems almost contradictory that Hollywood has chosen to shield us from it.

Certainly, it is true that the effects of Roe v. Wade on American women in the last 40 years are perhaps incalculable, however, as the political climate surrounding the issue has morphed from generation to generation, the cultural rhetoric of the topic as portrayed in film seems somewhat halted. Hollywood today, although popularly labeled as ‘overly liberal’ or ‘agenda-ed’ by some – as reported on this site in early 2012 – in actuality appears to be curiously wary of realistically portraying women confronted with the dreaded ‘choice.’ Of course, there’s a reasonable market-driven explanation for this trend: like Hollywood’s approach to the morbid fascination of deadly disease as villain (See: Contagion (2011); Outbreak (1995)), plots involving abortion are allowed, but typically only permitted if the characters involved choose the right path, resulting in the happy ending that most movie goers look for. Either way, in recent years, Hollywood has chosen to feature the word – and sometimes even the act – in several movies, albeit, not always in anything remotely close to a realistic situation.

It should be noted that there are exceptions to the basic Hollywood formula. Although many choose not to stray from the heartfelt option of choosing life, there are a few filmmakers brave enough to take on the story of women who have made the difficult decision to end a pregnancy. However, many of those that choose to take abortion on are independent, or, even worse, choose to illustrate the choice as removed from the real issue as possible. The standard approach in this case seems to be to showcase abortion as a choice that is much safer for women if legal, but ultimately something all women would choose not to do if possible. To make this work, Hollywood approaches the topic with two primary tools: (1) make the father a villain, giving the woman a clear ‘motive’; and/or (2) make sure the scene occurs in a time before abortion is legal and be sure to show what kinds of things could go wrong, suggesting that the issue at hand is that legality makes things safer.

Take, for instance, the 1980’s classic Dirty Dancing. In this case, Penny had no choice but to terminate her pregnancy not only due to her career, but also due to the fact that the father happened to be a Grade A Jerk. Throw in the scene where she comes back from the doctor injured, scared, and desperately in need of a proper doctor, and it becomes nearly impossible for any viewer to take issue with her choice. It may be interesting to consider how different the message might have been if Penny had been in a loving relationship and the abortion had been done without problem. 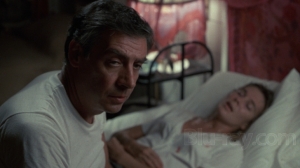 This model has been perpetuated in several other movies through the years, all with similar results. Even films that bravely place abortion – or sometimes, the choice of abortion – at the center of their plots almost always find a way to either victimize the woman undergoing the procedure or displace the issue to something larger. One example of a film that attempted to do both was the 1996 made for TV and critically acclaimed If These Walls Could Talk (1996). Sectioned into three parts, this film depicts abortion in three major time periods that cover the full political spectrum of abortion in 20th century America. In the first segment set before Roe v. Wade, the woman undergoes a botched procedure, which ultimately leads to her death. In the second, the woman eventually decides to keep the baby, and in the third, the plight of the woman at hand is primarily centered on political extremism.  While tackling three very different situations, none of the three segments depicts a legal, safe, abortion that was completed without any sign of extreme trauma. Although emotional and gripping, what this film failed to portray was the realistic fact that women in America decide to undergo abortions every day without abuse, death, rape, or political motivation involved. While this may not be the message the writer intended, it seems strange to leave the most common instance of abortion out of the equation.

On the flip side of the issue, there are plenty of less dramatic films that showcase abortion without attempting to make a political statement or provide a contribution to social commentary. However, almost without fail, these movies choose to force the women considering abortion to change their minds – sometimes even at the last minute. Classic examples include Juno (2007) and Knocked Up (2007), both films in which a character briefly considers abortion, before deciding instead to keep it. However, perhaps the most disturbing example is the recently released What to Expect When You’re Expecting, in which a character considers an abortion, decides to keep it, subsequently suffers a miscarriage, and finally learns to come to terms with the fact that she is not ready. While perhaps unintentional, this sequence of events seems to suggest that ‘nature’ should decide if a woman is not ready, rather than the woman herself. Although this message may have been provided with the best of intentions, it’s a dangerous way to portray a topic that many are so adamantly either in favor of or against. Either way, when it comes to a topic that is both politically sensitive as well as socially mainstream, if a film cannot provide an honest portrayal, perhaps its best to leave it out all together.