There is an old, possibly apocryphal story about a senator who stormed into the White House during the Coolidge Administration to complain that a man under consideration for being nominated to the Senate was “an SOB.” “That could be,” Coolidge reportedly conceded, “but there are a lot of those in the country, and I think they are entitled to representation in the Senate, too.”

I thought of this anecdote as the credits rolled on American Hustle, a dazzling kaleidoscope of corruption and desperation in which there is little moral distance between the politicians and the people. Christian Bale plays Irving Rosenfeld, a working-class stiff who has learned to make his own luck – he divides his time between a few small businesses and a few slightly larger con jobs (like selling fake art out of his dry cleaning shop). It’s hard work, and so is juggling a desperate, probably bipolar wife (Jennifer Lawrence), 6-year-old son, and a mistress/business partner (Amy Adams), but it gets even harder when a low-level FBI agent (an effectively manic Bradley Cooper) nabs Irving and then coerces him into helping the FBI bust a few criminals. At least, that’s how it starts. Things escalate, and pretty soon, the con man and G-man are taking on corruption at a much higher level: local politicians, organized crime, and, eventually, the United States Congress.

If this all sounds familiar, it’s because the film, co-written and directed by David O. Russell (The Fighter, Silver Linings Playbook), is loosely based on the real-life Abscam scandal that led to the conviction of 7 members of Congress in the early ’80s. As with all films based on true stories, it begs the question: why  now? What is it about this story that resonates in 2013? The most obvious explanation is that the producers were trying to cash in on the politics of the moment. With Congressional approval ratings at an all-time low and populist rage reaching a fever pitch, you would think American audiences would be ripe for a film that shows justice being done to some corrupt politicians. 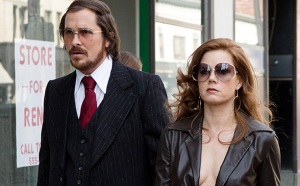 But that’s not what American Hustle is. In fact, it’s almost the opposite. Those members of Congress make only brief appearances in the film, and when they do, Irving explains to us in voice-over that they weren’t villains; to him, they were just trying to help their community and maybe help themselves a little bit, too. It would be easy to dismiss this as a justification from Irving (an unreliable narrator, if there ever was one), but another politician factors more heavily into the plot, and its his depiction that really challenges the way we typically think of government corruption in 2013.

Jeremy Renner plays Mayor Carmine Polito of Camden, N.J., one of the initial targets of the Abscam operation (before they moved up to Capitol Hill). The scam is complicated, but what matters is that Carmine wants to build a casino in New Jersey to improve the economy, and Irving talks him into doing a few untoward things to make it happen. As part of the sting, Irving buddies up to Carmine, and the two actually become friends. Through Irving’s eyes, we come to see Carmine as the most virtuous person in the film, an elected official who deeply values his constituency and his family, and is genuinely trying to do good for them.

And then Irving brings it all down. In the film’s most memorable scene, Irving comes to Carmine’s house to confess his role in the sting and to prepare him for what’s coming. The impact of this moment on Carmine is hard to quantify: in just a few minutes, he realizes he has been betrayed by his friend, he has failed his community, and he is going to jail.  A terrific performance from Bale earns some compassion for Irving, but our real sympathies lie with Carmine, the only really good man that the film has to offer, and the only one of the main characters who really gets screwed. After all, he never would have even gotten involved if Irving had not begged him and appealed to his sense of duty to his constituents.

So let’s check the score here: In 2013, when trust in government has sunk to near-Watergate levels, Hollywood makes a film about one of the most famous political scandals in American history…and depicts the politician as the virtuous one?  What is going on here?

Maybe Russell was just looking for a more interesting angle than a boilerplate tale of government corruption and disillusionment, but there is another perspective to consider: Hollywood is playing its role as a mainstream American institution of maintaining the status quo and holding society together. In the last several years, the Tea Party and Occupy Wall Street have railed against government corruption, and members of both groups (or, at least, people who claim to represent them) have floated the idea of a political revolution. American Hustle is an artistic act of re-assurance, showing us the human side of our political leaders and reminding us that we are all part of the same broken, corrupt system. If the perpetrators of one of Abscam can be shown to be sympathetic and (almost) blameless, what right do we have to come down on today’s politicians? The inherent message of Russell’s version of these events, then, is: don’t blame congress. To paraphrase President Coolidge, there are a lot of corrupt people in America, and they deserve representation, too.