Well, the inevitable has finally occurred: Television and cinema have merged. For years, the line between the two was blurred mostly by the onscreen talent. TV stars have always been trying to make the jump to film; it’s only recently that the talent has begun to flow in the other direction (see True Detective for the best and most recent example). But despite improvements in the quality of television and the increasing migration of actors back and forth, the forms have remained fairly distinct. Flipping through the channels, it has always been pretty easy to tell which was which.

Until now. Veronica Mars, now out in theaters and (of course) on VOD, is a ninety-minute episode of television that just happens to be called a film. Based on the popular but cancelled television show, Mars brings back Kristen Bell, who got her start on the show but is now successful in the movies, as the titular teenage private eye. Nine years after the events of the show ended, Veronica has grown up and is about to embark upon a soul-crushing career as a corporate lawyer. But she puts all of that on hold when an old flame is accused of murder in her hometown of Neptune, California, and instead heads back to help him clear his name. Coincidentally, it is also the weekend of her high school reunion, and – wouldn’t ya know it – some of her old classmates seem to be connected to the crime.

If nothing else, Veronica Mars may be worth watching for the star at its center. Brimming with confidence after her celebrated vocal performance in Disney’s Frozen, Bell transcends a script that relies more on snappy dialogue than character development and imbues Veronica with something universal. While the details of the character’s life may be unusual and unnecessarily quirky, Bell makes her into a relatable twentysomething in the midst of a quarter-life crisis, just trying to figure out who she is.

But while her movie-star charisma may keep the film watchable, it is just as often a hindrance to the story. Veronica was supposed to be an outcast and kind of a screw-up in high school, right? Bell seems more like someone who would have sat at the cool table. Her ability to turn an underwritten character into something compelling is impressive, but it only throws some of the production’s shortcomings into greater relief. Despite the increased budget, Veronica Mars still looks very much like a television show, never achieving the grandeur of actual cinema, and you might find yourself wondering what a movie star is doing on such a pedestrian show.

The rest of the cast can’t measure up to Bell either.  Experienced television actors like Jerry O’Connell (Sliders, Crossing Jordan), Enrico Colantoni (Just Shoot Me), and Martin Starr (Freaks and Geeks, Party Down) know how to read their lines, but there is a reason none graduated to the big screen, and few in the cast create memorable characters. 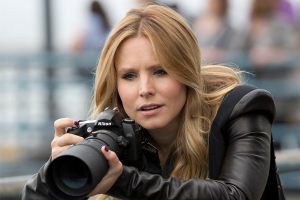 But each of the film’s failings can be attributed to a single, central flaw: the now-famous road that Veronica Mars took to the big screen. After a feature-length script was rejected by the major studios, Bell and the show’s creator Rob Thomas took to the internet and asked the show’s passionate fan base to finance the film themselves through an online Kickstarter campaign. Thomas set a goal of raising $2 million; they reached it in the first ten hours. By the time the campaign was closed, nearly 100,000 people had contributed, and more than $5 million was raised. Hollywood pundits wrote long, eloquent articles about how Thomas had transformed the industry, but few of them asked what impact this would actually have on the content and quality of the film itself.

The result is a dichotomous viewing experience. Thomas gave his backers the film they wanted, and all evidence shows that they are happy with it – it made $2 million its opening weekend on just 291 screens. But I can’t help but feel he missed out on an opportunity to truly expand his audience. The contours of film allow for greater depth and a wider scope than television, and a truly cinematic Veronica Mars movie could have created enough of a buzz for Thomas, Bell, and all their backers to make more of these and really begin to explore the character using all the tools of cinema. As it stands, Veronica Mars may be remembered only as an industry anecdote and a reminder that, no matter how much the way we interact with the world changes, we keep saying the same things.

2 thoughts on ““Veronica Mars” Plays to its Base”