The floodgates have now officially opened. The success of Divergent, a Hunger Games knock-off that grossed $54 million in its opening weekend, ensures that we’ll see many more of its kind in the coming years. In fact, we won’t have to wait that long. Later in 2014, The Maze Runner and The Giver will follow similar templates with post-apocalyptic scenarios, teenage heroes, and an anti-conformist message. But while the success of Divergent is a good thing for the industry (and for authors of similar YA books who will soon see big paydays when their properties get optioned), it might not be great for the rest of us. Divergent is far less politically aware than The Hunger Games, and it offers a textbook case of how corporate media can co-opt and ultimately destroy movements for social change.

The first Hunger Games movie reflected the revolutionary impulses of the moment. When it was released in 2012 to huge commercial success, both the Tea Party and Occupy Wall Street were in full swing, their members protesting in the streets and threatening (either implicitly or otherwise) armed revolt. Pundits on both the left and the right scrambled frantically to claim the film’s politics as their own, but any claim to partisanship missed the point. The success of the film cut across party lines, which illustrated the depth of our collective frustration with the status quo. In other words, it was not only about a revolution, but it also had the potential to start one.

But it’s easy to sell movie tickets; an actual revolution is harder to pull off, especially when corporate media controls the message. This is the lesson taught by Divergent, which fails to politically engage the viewer and leans on a pervasive anti-intellectual subtext. The film takes place in post-apocalyptic Chicago, where society now divides its citizens into factions based on their innate talents: there is Candor (the honest ones), Amity (the peaceful), Erudite (the intellectual), Dauntless (the brave), and Abnegation (the selfless), who handles the governing duties. This seems like a pretty good deal for everyone except Beatrice (Shailene Woodley), our teenage heroine who learns that her individualistic, non-conformist mindset makes her a threat to the structured order of society and ultimately puts her life in danger. 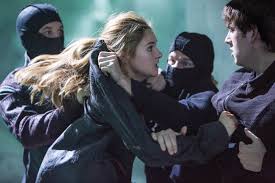 In better hands, it could be a set-up for a sharp political allegory, but the film lacks the courage of its convictions. What’s particularly unsettling is that Divergent never bothers to puts its events in context; we are never told what events led to the dystopian scenario the film asks us to accept. In The Hunger Games, we are explicitly told about the first revolution – the one that failed – and how the games were created as a tool for controlling the masses. This explanation helps us place the film’s central metaphor in the context of social justice. Divergent, on the other hand, offers no context at all and seems to think that we should simply accept a post-apocalyptic scenario on faith alone. This has some troubling extrapolations to the real world, no? As an audience, are we now in a place that assumes an oppressive, totalitarian future?

The makers of Divergent seem to think so, which would be fine if the film were interested in helping us avoid it. But it also engages in such strident anti-intellectualism that it’s hard to see anyone leaving the theater thinking about how to achieve change. The plot of the film eventually settles on a scheme by the Erudites (with help from the Dauntless, who function as their muscle) to wrest control of the government away from Abnegation. The Erudites are the learned ones, and so, they think that they should be in charge. But their intelligence is never shown to be a virtue; instead, the film lazily equates intellectualism with fascism. Images that recall the Holocaust are (too) casually trotted out in the film’s final third, and Kate Winslet even went ahead and dyed her hair platinum blonde to play the villainous Erudite leader.

But you don’t have to go back 70 years to see the problem with the film’s stance on intellectualism. In recent years, anti-intellectualism has become a staple of the far right, a political demographic that controls a large slice of Congress (a majority in the House of Representatives). Tea party legislators reject peer-reviewed science, including the alarming data on climate change which points to, ironically, an apocalyptic scenario. They also eschew all traditionally-accepted barometers of intelligence; both President Obama and Senator Elizabeth Warren, for example, have been consistently painted as elitist and out-of-touch for their associations with Harvard University.

This may not be what author Veronica Roth had in mind when she wrote the Divergent books. In fact, she has been very upfront about the fact that the story’s blatant anti-intellectualism was really just the result of some issues she was having in her personal life with intellectual colleagues. But authorial intent only excuses so much, especially when the details of her story match up so neatly to our current political climate. The Tea Party, for example, routinely blames the “liberal media” for misleading the public, a position that the film supports: In order to weaken Abnegation’s hold on the government, the Erudites launch a media smear campaign of their leader, using the local newspaper to spread hurtful information.

Of course, none of this – not the unexplored political context, the irresponsibly casual references to the Holocaust, or the allusions to liberal media corruption – would be so problematic were Divergent not such an entertaining film. It’s a clever concept and it has a gripping emotional through line held together by the effortlessly charismatic Woodley. And therein lies the problem. Entertainment is itself an opiate of the masses, and by co-opting the language of the revolution and stripping it of all its political content, Hollywood is reducing the revolutionary impulses of the younger generation into a genre. A marketing ploy. With the releases of so many other YA/dystopian films on the horizon, Divergent could just be the beginning of the end.

2 thoughts on “How “Divergent” Co-opts the Revolution”