In our culture so obsessed with youth, it’s a rare for a film to seriously grapple with the aging process. Sure, there are those condescending old-people-behaving-badly flicks like Last Vegas, Quartet, and, to some degree, the Best Exotic Marigold Hotel franchise, but they rely on tired jokes about artificial hips and pacemakers, and only skim the surface of the real anxieties about aging and death that often go unspoken in our society.

So how lucky we are to get two films in one month that seriously address aging – albeit from a slightly younger perspective than those other films. Noah Baumbach’s While We’re Young and Oliver Assayas’s Clouds of Sils Maria tackle the encroaching anxieties of middle-age with insight and compassion, but they also achieve something more universal, speaking to an inter-generational artistic conflict that is currently playing out on a larger scale.

On the surface, the two films have little in common. Clouds is an emotionally intense French meta-narrative, and While We’re Young is another urban dramedy by Baumbach, who has put his own stamp on the genre with The Squid and the Whale, Greenberg, and Frances Ha. In this one, he reunites with Ben Stiller for a story of a child-free Manhattan couple who get rejuvenated when they befriend a pair of young Brooklyn hipsters. While their peers are sinking deeper into the dormancy of parenthood, Josh (Stiller), a well-known documentarian, and his wife Cornelia (Naomi Watts) try on the young, carefree lifestyle of filmmaker Jamie (Adam Driver) and artisanal ice cream manufacturer Darby (Amanda Seyfried). They buy vintage hats, attend “beach days” on the streets of Bushwick, and even dabble in psychedelic drugs, but their metamorphosis is not just cosmetic: Josh and Corenlia become more open and adventurous than they had ever dreamed. 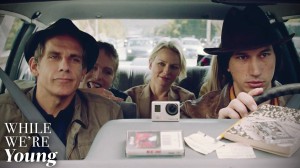 Baumbach stages these early scenes with glee – watching the neurotic Stiller pretend to be carefree has been a comedy goldmine for years now – but he eventually steps into darker territory. The trouble begins when their personal and professional lives overlap. After Jamie ropes Josh into supporting his new film project, Josh begins to suspect that Jamie is only using him for his connections. Is it possible their entire friendship was contrived by Jamie to further his own career? Josh starts digging into Jamie’s background, and, because he has been so influenced by the young couple, much is riding on the answer.

Clouds takes the same subject to a very different setting. The anxious grown-up is Maria (Juliette Binoche), a renowned actress who is struck with grief by the suicide of her mentor, a playwright who decades earlier jumpstarted her career by casting her in a famous play. The story of the play – it’s about a young businesswoman who befriends and eventually usurps her boss – plays out on several levels. First, Maria is asked to star in a revival, except this time in the older woman’s role. She retreats to the mountains with her young assistant Valentine (Kristen Stewart), where they run lines, drink copious amounts of booze, and bond a little too much. Just like with Jamie and Josh, the professional and personal lives get muddled: The themes of the play are evoked in Maria’s friendship with Valentine, as well as her relationship with Jo-Ann Ellis, (Chloe Grace Moretz), the troubled young Hollywood star who has taken on Maria’s old role in the revival. The two actresses don’t meet until late in the film, but the starlet’s reputation as a tabloid queen with little respect for her craft casts a pall over Maria’s life: She has glimpsed the future, and she ain’t it. 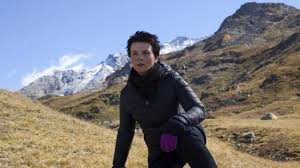 But Maria sees more than her own obsolescence when she looks at Jo-Ann; rather, it’s the desecration of her artistic values that she fears, and watching a Hollywood celebrity destroy the role with which she has always identified is perhaps a fate worse than death. Josh suffers from the same anxiety. When he begins to work on Jamie’s film project, the inquiry into Jamie’s character soon morphs into a discussion of the ethics of art in the age of new media. Jamie doesn’t see anything wrong with manipulating the subjects of his documentary, jumbling the timeline, and filming his subjects without their knowledge, while Josh, tied to a perhaps antiquated sense of ethics, is offended by the very idea. Baumbach doesn’t take sides in this debate. Instead, we see this through Josh’s eyes, and all he sees is a new generation of artists coming to push him and his principles out of the way.

The protagonists used by Assayas and Baumbach to embody these issues are surely motivated by their personal lives; these are, after all, films about filmmakers. But that prism also casts some light on our culture at large. The conflicting notions of artistry on display in While We’re Young and Clouds of Sils Maria feel right for our age in which non-fiction storytelling is increasingly coming under fire for its perceived manipulations of their audience. This trend began with 2010’s Catfish, a much-scrutinized documentary about a guy who meets a girl on the internet, sets out to find her, and discovers she is nothing like her picture. After its first public screening, rumors that some elements of the film were faked began to spread. More recently, true crime stories like NPR’s Serial and HBO’s The Jinx have been subjected to criticism and fact-checking, with much higher stakes for the people involved. Anne Helen Peterson at Buzzfeed did a sterling shot-by-shot formal analysis of the latter in order to point out how director Andrew Jarecki “proved” Robert Durst’s guilt in part through editorial manipulation. It’s an incisive and important piece of cultural criticism, but she lets largely Jarecki off the hook in her closing paragraphs: “All filmmakers, documentarians, and television journalists included, manipulate what’s in front of them.”

This may be true, but it is hardly a reality that Baumbach, Assayas, and their surrogates seem willing to accept. We can read the skepticism of The Jinx and other non-fiction narratives as part of the generational divide that these films explore. The ages of the filmmakers and critics involved are immaterial; The Jinx and Serial are designed for young people. They come in easily digestible one-hour forms, and they are built to be dissected, promoted, and even criticized on social media. The finale of The Jinx generated a whopping 35,000 tweets, according to Nielsen TV Twitter ratings (which apparently is a real thing). The characters in While We’re Young and Clouds of Sils Maria would almost certainly question the wisdom of documentary activism that is designed to entertain first and discover truth as an afterthought, but if their stories are any indication, there is nothing we can do to stop it.