For many years, director David O. Russell was known for his eccentricity. His films were odd, idiosyncratic comedies such as Flirting with Disaster and I Heart Huckabees, which garnered cult followings but no mainstream success. Then there was the leaked video of Russell throwing a vicious tantrum on the set of Huckabees. Although Lily Tomlin, the target of his ire, was publicly forgiving of Russell, the incident created a negative image of the director that was difficult to shake.

All of which made it more surprising when Russell delivered the crowd-pleasing, Oscar-winning boxing drama The Fighter. The film was devoid of idiosyncrasy, instead relying on a humdrum story brought to life by deeply felt performances by Mark Wahlberg, Christian Bale, and Melissa Leo. The film put Russell back in Hollywood’s good graces, and why not? Everyone is happy when the grosses are good.

But what would he do with this newfound respect and credibility? Not much, I’m afraid. If The Silver Linings Playbook is any indication, Russell has become too enamored with his ability to please all of the people all of the time. The film, which tells the story of a bipolar man trying to regain control over his life after being released from a mental hospital, uses mental illness as a shortcut for character development and adds up to little more than a standard rom-com, although it thinks of itself as much more.

Bradley Cooper plays Pat, who discovers his bipolar disorder only after beating his wife’s lover to a bloody pulp. He has agreed to a stint in a mental hospital instead of jail, and upon his release, he moves back home, where he clashes with his bookmaker father (a relatively spry Robert DeNiro), his put-upon mother (Jackie Weaver), and, most notably, a local widow, Tiffany (Jennifer Lawrence), who, conveniently for Pat and audiences alike, is young, attractive, and hyper-sexual. 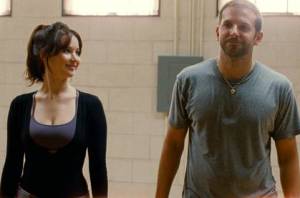 There is a long history of using mental illness as a means for film comedy, and only some of it has been offensive. The success of The Fisher King (1990), for example, was particularly remarkable because it used Robin Williams, in spastic improv mode, as the mentally ill lead. The Farrelly brothers’ Me, Myself, and Irene (2000) drew a protest from the National Alliance for Mental Illness for its comic and inaccurate portrayal of multiple personality disorder. The closet corollary to the tone of Silver Linings, however, would be As Good as it Gets, in which Jack Nicholson’s writer, suffering from obsessive-compulsive disorder, is forced to re-examine his commitment to his mental health when he falls in love.

Silver Linings seems to be aiming for the same tone, but As Good as it Gets succeeded in large part due to the performances of its leads, and this film does not measure up in that department. The choice of hiring Bradley Cooper and Jennifer Lawrence seems to have been made more for financial reasons than artistic ones. Neither has ever shown the ability to portray a character’s rich inner life, a quality that these roles demand; while each of them should be given credit for trying to break out of their comfort zone (you can, in fact, feel them trying to do this onscreen), the performances are simply not where they need to be.

To its credit, the film takes its characters and their illnesses seriously enough, but I was offended more by its narrative shortcuts than its depiction of their mental states. The lead characters are driven only by their dysfunctions, and it is simply not enough to build a movie on. Silver Linings thinks of itself as a work of fusion, something like a romantic comedy with gravitas, but in reality, it is simply a work of exploitation. Whatever notions one might have that Russell is truly interested exploring the bipolar mind dissipate as the film moves towards an ending straight out of the rom-com template.

In a way, Russell is trying to do the same thing with Silver Linings that he did with The Fighter: breathe life into a tired genre with a firm directorial hand, some good performances, and a crowd-pleasing ending. But the film uses the veneer of mental illness and grief to hide the fact that its characters are completely lacking in complexity. Taking a page from its lead character, the film sets itself in the milieu of life’s dark clouds but ultimately ignores them in favor of its silver linings.

2 thoughts on “Mental Illness as Plot Device in “Silver Linings””