Anna Karenina is the kind of movie that will inspire a lot of arguments, which is to say you will either love it or hate it. If you are wedded to the classical realism of the novel on which it is based, you will hate the leaps of imagination made by director Joe Wright that paint the actions of the heroine as more silly than tragic, turning the tragedy almost into farce. If you can let go of the source material and are a fan of operatic films like Magnolia and Cloud Atlas, you will be overwhelmed by Wright’s ambition and inspired by the risks taken in this bold re-interpretation of the classic work. I fall into the latter camp. Although I admittedly give extra credit for originality, Anna Karenina works on its own terms as the story of a woman whose heart is too big for the society in which she was raised.

The story is rather simple: Anna lives in late 19th century St. Petersburg with her husband, Alexei, a well-known government employee, and their eight-year-old son. Anna is happy – at least, she thinks she is – until she meets the charming Count Vronsky. Their undeniable attraction leads to an affair, and she chooses him over her family, suffering the shame of polite society as a result. Affairs in her world are commonplace, but by leaving her husband, one character notes, Anna “broke the rules.” For this, she is ostracized.

Keira Knightley is the perfect choice to play Anna. In a film that examines the cold, disassociated attitudes of the aristocracy, Knightley gives a stirring emotional performance. As a bureaucrat’s wife who gives up everything to be with another man, she brings her best qualities as an actress – nervous energy and visceral passion – to a character deeply affected by the harsh gaze of society. As Alexei, the cold but sympathetic husband, Jude Law gives one of his best performances. In fact, it may signal a new phase in his career. As he enters middle age and wears his receding hairline without shame (a rarity for a Hollywood actor), Law can no longer play the dreamboat. Here, he plays Anna’s embittered cuckold with expert precision.

Of the three leads, only Aaron Taylor-Johnson, as Anna’s lover, seems out of place. Taylor-Johnson’s career has grown by leaps and bounds of late. From the nerdy teenage superhero of 2010’s Kick-Ass to the pot-dealer-turned-action-hero of this year’s Savages, he has now transitioned to the type of role reserved for budding movie stars. It may have been too large a leap. Taylor-Johnson does not bring much to the role besides his looks, and as a result, we never quite understand the depth of Anna’s love for Vronsky. The film suffers as a result.

But the overwhelming spectacle of Anna Karenina leaves such concerns in its wake. Wright imagines Karenina as a play and each character merely a player. This motif serves two purposes. It highlights the artifice of high society, as each character is prohibited from acting on real emotion, only playing the role they are assigned. Further, it viscerally represents the fishbowl that is the aristocracy. After Anna makes her decision to leave Alexei, the eyes of St. Petersberg rest upon her, and the isolation drives her mad. In this way, Wright’s adaptation correlates that society to our own, in which fame is valued as its own shallow virtue, and we revel in watching our celebrities fall from grace. 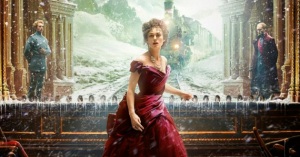 At times, however, spectacle comes at the expense of the story. Wright’s visual boldness overwhelms the other senses; the color palette alone, with its deep blues representing Anna’s descent into madness and morphine addiction, is astounding. Wright wisely downplays the film’s framing as a theatrical production during the second and third acts, but it still distracts. I mostly sat in rapt wonder at the event portrayed on screen – but wonder is not engagement.

Still, if you give extra credit for boldness and ambition, these will prove to be only minor quibbles. Like its heroine, Anna Karenina would rather fail magnificently than make safe choices. This is not a middling, passable adaptation of its beloved source material; the film takes nearly unimaginable risks and mostly succeeds, which is to say Anna Karenina embodies the passion of its protagonist. It is an easy film to love.