Yesterday, Politico reported on a screenplay making the rounds in Hollywood about Hillary Clinton. If production on the script were to begin soon, the film might be released somewhere in the middle of the 2016 presidential campaign, which many expect Clinton to be a key participant in.

But this is not the story of Clinton’s tenure at Foggy Bottom, or even the tumultuous years in which Bill was president. The screenplay, tentatively entitled Rodham, is about a young woman at a crossroads, torn between her own career and the political aspirations of her boyfriend, a young southerner named Bill. As such, casting a young Hillary could take some time, mostly because young women of Clinton’s intelligence and poise are not often portrayed on screen. Likewise, young blonde actresses with intelligence are not sought after in Hollywood. Box-office draws like Emma Stone, Jennifer Lawrence, Scarlett Johansson will surely be vying for the role, but I’m doubtful any of them have the chops to pull off a character of Clinton’s complexity and seriousness of intent. 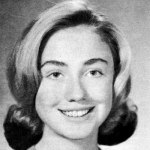 So in case the producers get stumped and go scouring the Internet for suggestions, allow me to submit the following suggestions:

Olsen has been the darling of the Sundance Film Festival for two years running: first for her arresting debut in Marcy Martha May Marlene, and then with her winning performance in John Radnor’s dramedy Liberal Arts. Given her range, I would not put any role past her, but she is the right age and at the right point in her career to break out in a big way in an iconic role.

With her starring role in Showtime’s Homeland, Danes is beloved by the Washington elite right now. Even President Obama cites it as his favorite show. Danes is clearly comfortable in the milieu of government, an important quality for this film that finds Hillary as a young aide on a Congressional committee. Danes has never really had that big breakout movie role, and this role just seems too good a fit to ignore.

McAdams is probably the biggest movie star on this list, but she also can act. She was terrific as the driven young TV producer in the competent romantic workplace comedy Morning Glory; presumably, she could play Hillary with many of the same qualities. McAdams has also had a steady fan base since The Notebook. Cast Ryan Gosling as a young Bill, and you’ve got a surefire hit.

Wood proved her acting chops in the HBO miniseries Mildred Pierce with Kate Winslet. Ten years ago, Winslet would have been a fine choice for Hillary, but it’s time to pass the torch, and Wood has been a quietly effective lead actress for a decade now, often playing characters who are in just slightly over their head and are struggling to hide their naivete. She would bring interesting emotional layers to the confident young Hillary.

Poots currently has seven films (!) in production or post-production, so you are going to be seeing a lot of her in the next year. She impressed me in last year’s A Late Quartet, holding her own among a small cast that included Christopher Walken, Catherine Keener, and Philip Seymour Hoffman. The only problem: Poots, a Brit, had trouble mastering the American accent in Quartet. Hillary famously turned her Southern accent on and off, which means Poots has some work to do.

This one is mostly based on physical resemblance. I have only seen her in one film – Ruby Sparks – and while she was good, the role bears no similarities to Hillary. But Kazan has a long history of acting on the stage, so I’m sure she has the chops to tackle this role. Kazan is also bright – she wrote last year’s interesting Ruby Sparks. Finally, there is the resemblance. She looks more like a young Hillary than anyone on this list – and in the movies, that counts for a lot.

Tell us what you think!